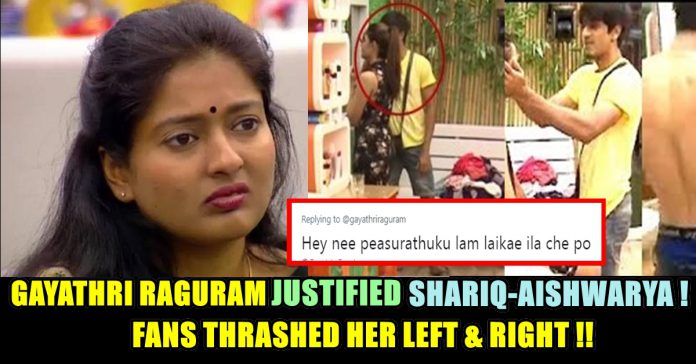 “Shaariq-Aishwarya Are Pure & Have Nothing In Heart” Said Gayathri Raguram !! Got Thrashed By Fans !!

The Kamal Haasan-hosted Bigg Boss Tamil Season 2 has become the talk of the town for a variety of reasons. In fact, it would not be wrong to say that it is the hottest and most controversial show on the small screen today. Just like the first season, the second/current season too, features several twists and a host of interesting contestants. However, the action is a lot wilder this time around. And, it seems that things will become even raunchier in the days to come. With Bigg Boss Season 2 in full swing, here is a look at what happened on Day 16.

Currently Bigg Boss housemates are worried about Ponnambalam and Tuesday’s episode began with Janani and Vaishnavi who spoke about who may get eliminated in the coming week. Vaishnavi then recounted an incident where Ponnambalam comment was double meaning. She said she told him it was this behaviour that got him jailed in the house. Initially the housemates began to play the game with enthusiasm, however, the ongoing issue of Mahat speaking an abusive word and Ponnambalam using innuendo distracted them. Yaashika also told Mahat that Nithya felt his use of abusive words was equal to what Balaji did a week ago. She also said that she tried to explain that they had a comfort zone where they abused each other playfully and it didn’t matter, however, this didn’t stop here. Balaji discussed this with Ponnambalam and Yaashika is annoyed that whenever Mahat loses his temper, everyone thinks it’s her fault. Towards the end of the episode, she explained to Mahat that they need to concentrate on the game instead of standing up for each other. She is also sure that she is the one going home this weekend.

Meanwhile, Gayathri Raguram, the controversial contestant of previous season felt that the participants of this season who got into the problem for being in the same bed had no bad intuition and only friends. Shariq and Aishwarya are the people who got into this issue to which Ponnambalam reacted and went to jail now. It is also notable that Shaariq confessed to Yaashika what all happened between him and Aishwarya which will clearly denote that they had something between them beyond love.

Now the statement from the Actress/Dancer Gayathri Raguram created hatred against her among the fans. Check out her tweet below :

Dint u all see romance in BB 1 and this closeness? And dint ppl sleep together for task tied up by hands and legs? How can u corner those who dint have bad intuition and just behaved as friends with nothing in heart?

Check out the fans reaction for her statement :

Oh really. Den y dd u say arav to stay away from oviya. R u trying to cover dat u n shakthi sat on the corner bed.

Omg you came back I think in your family everyone is comfortable to see like this but in our families. Your from so called film industry in your family it’s normal bcz your like that they use to it. You better don’t comment

Accepted.. but activities of Mahat is not justifiable

We’ve seen u and shakthi on the same bed. But no one criticised it coz ur behaviours didn’t make us look it in a bad way. These guys aren’t that, we can feel their intention is different. Whats your opinion on her statement ??

Previous articleBREAKING : Taj Mahal To Be Demolished ?? SHOCKING From Supreme Court To Centre !!
Next articleNot Getting A Perfect Platform To Promote Your Independent Music Albums ?? This Is The Right Place For You !!

“What Is The Difference Between You & Meera Mitun ?” – Actor Condemned BJP Worker