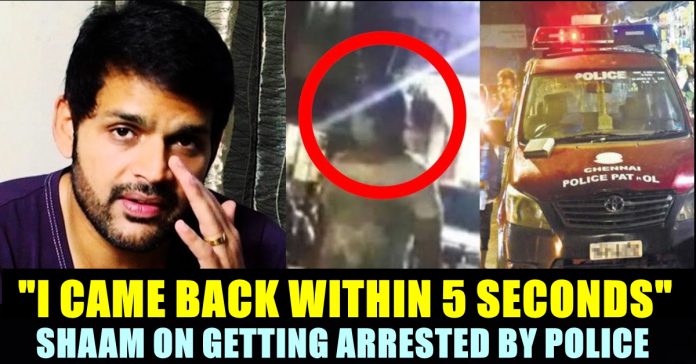 Popular Tamil actor Shaam who recently got arrested for involving in alleged “Gambling”, appeared for an interaction with media for the first time. The report of Times of India says that he got arrested along with 13 other people by Chennai Police. They got booked under the Gaming act, and then got released on bail, reports suggests.

Police reached his home in Nungamabakkam after getting information which said that they actor is involved in gambling at his residence. Money and bundles or cards have been confiscated by the Police, the report added. It has been reported that the police had recovered token used for gambling from the flat owned by the actor. There is also a buzz doing rounds among news portals saying that other actors of Tamil film industry are also indulged in the illegal activity along with Shaam.

The 43 year old actor completely denied all the allegations in a recent interaction he appeared. He said that he played poker with his friends to kill time amidst the lockdown situation which was misinformed to Police. He said that used to involve in activities such as playing cricket and football with his friends before lockdown. “As we couldn’t go anywhere due to the lockdown restriction, we decided to spend some time together” the actor said.

“Police came to my house as they got an information from a source. I said to them that we were just playing cards. They checked my office space and house thoroughly. After that they informed to higher officials saying that there is nothing suspicious in our premises. They concluded that we were playing only in friendly manner. After that they asked us to go with them to police station to sign. As I have to abide by the law which is the most superior thing, I requested my friends and we went to police station to sign. Hardly, within 5 seconds, we signed and left the station. I also told my friends to avoid meeting till Corona ends. My friends came and ate before leaving” Shaam said in the interaction.

Shaam said that it is impossible for him to involve in such thing as he has a family. “We never used the word money for even namesake while playing. The least thing that will happen is, we will ask the one who badly lost to pay the bill.” he said. Shaam also said that he felt bad on seeing the baseless rumours in media portals. “No First information Report was filed against us” he said.

“I am not a lone person to run a Casino in Chennai which is completely illegal. I got married 15 years ago and my daughter is going to school now. I can’t think of doing such irresponsible activity” the actor added. Shaam made his debut in Tamil film industry through “12B” that got released in 2001. He is known for acting in films such as Lesa Lesa, Ullam Ketkume, Iyarkai etc.

Previous articleVijay’s Reply To A Fan Who Questioned Him For Endorsing Coca Cola !!
Next article740 Tonnes Of Ammonium Nitrate Stored In Chennai As In Lebanon ??

Not Vijay Or Vijay Sethupathi , This Man Steal The Show !!

The most awaited audio launch of Vijay's sixty fourth film "Master" took place yesterday and it got telecasted in Sun TV. The function involved...

Arnav Vijay, son of actor Arun Vijay, will be making his acting debut with a film produced by Suriya's 2D entertainments. Directed by Sourav...