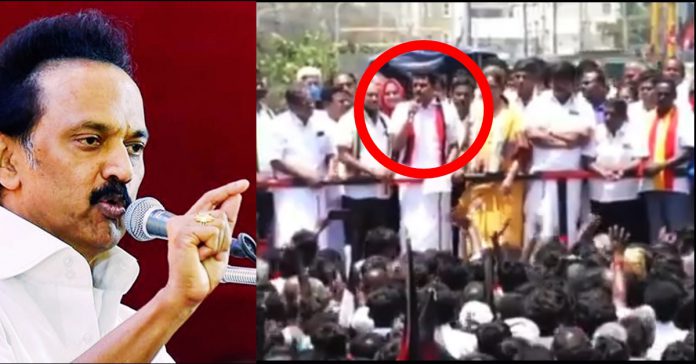 While several political parties of state Tamil nadu are making various kind of promises to attract people ahead of the upcoming assembly elections, Senthil Balaji, a candidate of DMK party has promised allow sand mining and remove government officers who questions it if Stalin wins. The video of his speech is doing rounds in social media platforms with reactions from the public condemning him.

Senthil Balaji is contesting in Karur on behalf of Dravida Munnetra Kazhagam led by MK Stalin. While interacting with the people of his constituency, Senthil Balaji has promised that if his party is voted to power, sand mining may be allowed in the state and any government authority trying to create a problem will be terminated immediately.

“If Thalapathy Stalin takes oath as the Chief minister at 11 : 00 AM, then at 11 : 05 AM, you all can directly take your bullock cart into the river for sand mining. No officials could stop you. if you stop you, call me immediately, he will be removed immediately” the politician could be seen saying.

DMK leader Senthil Balaji says " When DMK comes to power , Stalin will take oath by 11 AM, you all can start stealing River sand by 11.05 am, lets see which officials stop you "

Do you want these goons to come to power ? pic.twitter.com/VBoJqldEJm

On Sunday, ruling government AIADMK has released its election manifesto in Chennai and it mainly targets the women of the state. Among its promises are Amma washing machines, travel concessions for women, implementation of the Amma banking card scheme and dual citizenship for Sri Lankan Tamils. At least one person from each family will be provided a government job, the party has said.