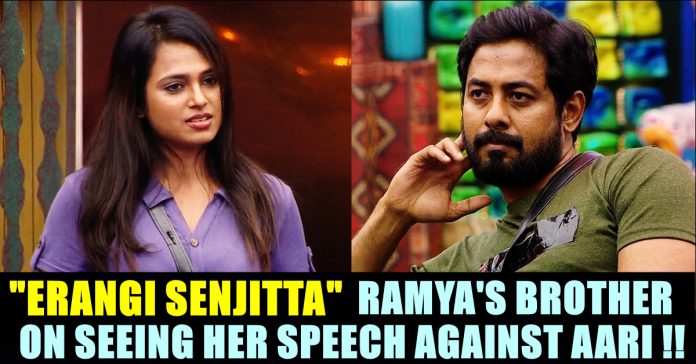 In a recent task for ticket to finale, Bigg Boss asked the contestants to point out the flaws of their co-contestants. Each contestant were supposed to state the defects of the six other contestants and were asked to validate themselves from 7 to 1 by voting. Aari received 1 point and got the last spot whereas Somashekar got the highest number of points from his co-contestants and topped the list. Bala got 6 points and was placed at the 6th spot, Rio, Ramya, Gabi, Shivani garnered fifth, fourth, third and second place respectively.

All the contestants gave their best but a post uploaded by Ramya Pandiyan’s brother in his Instagram account has grabbed the attention of the Bigg Boss followers. He who visited the house during freeze task, said that his sister followed his words and has rocked the task in style.

Kamal Haasan hosting Bigg Boss show is nearing its end and the show organizers have conducted a ticket to finale task for the top 7 contestants who are residing inside the house. All the 7 contestants were nominated for the eviction and they were all contending for the ticket to finale task as well. Currently, Rio is leading the race with 29 points followed by Ramya and Shivani who have scored 27 and 26 respectively.

In the task, Ramya spent a very long time in pointing out the flaws of Aari. “He playing the game in his own way is acceptable but accepting all the 17 other contestants to play the game in the same way is a big flaw of him” Ramya started telling about Aari.

“You are thinking that pointing out the flaws of others is your strength. You should have asked yourself whether the words you are using when you are in anger are right. Spreading happiness and positivity could be a part of the life and the game. As you said that this game represents our life. Have you ever questioned yourself on that basis ??” she asked.

Further Ramya said that Aari is influencing crores of people by repeatedly justifying himself. She also said that Aari is carrying baggage and terming it as memory power. “It doesn’t looks like your memory power as you are using it to condemn or blame someone. So I see it as a baggage” she said. “Finding people’s fault might be your talent. But I see it as a flaw as far as this game is concerned” She concluded her task and grabbed fourth spot.

The points made by Ramya made people to react in various ways. Various memes and opinions kept surfacing since the telecast of the episode. Check out some of them below :

Because Of You guys , We are increasing our support level .

I loved it when Aari's face was perspiring like hell after Ramya's speech! My mind was like " Summa kizhii !"😜😜😜

Logic of #Ramya: Mocking #Aari with other housemates is called "Happiness" / "Spreading Positivity". "Raising voice when something goes wrong" is boring and fault finding.#BiggBossTamil4

Previous article“Stop This Right Now” – Anushka Sharma Got Extremely Frustrated !!
Next articleShruthi’s Reply To Trollers Who Called Rio As “Comali” !!

This Man From Chennai Gave 25 Lakh Only To Receive A “Titan” Watch !! : Check Out The Story Behind !!

It was 7:30 pm on Friday. The first floor non-AC seating area in the Annanagar Saravana Bhavan branch in Chennai was bustling with activity. Waiters in...