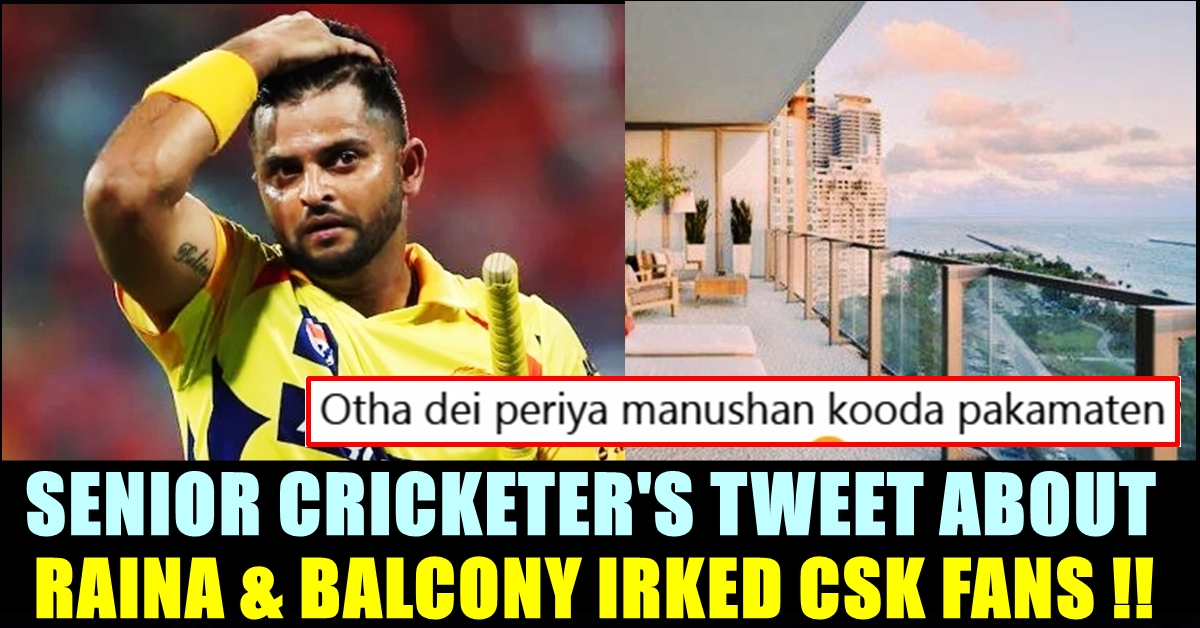 Raina made his comeback into the CSK team in style by smashing a terrific half century. Unfortunately he got out while running between the wickets but the impactful half century helped team CSK to reach a competitive total of 188 runs. Entire Internet came up with tweets lauding the cricketer’s flawless innings but a tweet uploaded by former Indian opener Virender Sehwag has irked the fans of the CSK team. He uploaded a picture of a balcony and said that it made the difference in Raina’s commitment.

On 29th of August 2020, ahead of the IPL tournament, it was announced that Raina will be leaving UAE due to personal reasons. It was said that he will no longer be available for the whole tournament of IPL. A speculated rift between the team management and Suresh Raina was also did rounds at that time which left the fans in a dejected state.

While media outlets and public believed that Raina left CSK due to the assault in his uncle’s home, a news update emerged saying that the cricketer left UAE after having a rift with the team management for not providing him a proper hotel room that he demanded.

A report said that Raina was unhappy since the day Chennai Super Kings landed in Dubai for IPL 13. The 33 year old cricketer was finding the stiff protocols of the bio-bubble claustrophobic and demanded a similar room that was Dhoni facilitated with. Reports said that Raina had issues with his room having no proper balcony. However, it was brushed off as a mere rumour and CSK management backed Raina as a result of which he is playing for the Dhoni led team in the 14th edition.

On seeing his terrific innings in the first match of CSK in the tournament, Virender Sehwag uploaded a picture of a balcony and indirectly trolled Raina by saying that it made the difference. The cricketer also asked his followers not to take it too seriously as it is just for fun.

This is the difference. Jai Jai Balcony.

Despite of the former cricketer’s disclaimer on being funny, many fans of team CSK got disappointed and expressed their emotion. “Not funny” said a fan whereas another one dubbed his tweet as “Cringe”. A number of fans went on to abuse him in cuss words as well. Many also mentioned about the demise of Raina’s family members and termed Sehwag’s tweet as an insensitive one.

Stfu this is not even funny
This is insensitive. Raina missed IPL because his relatives were k*lled
Shame on you https://t.co/Atm3AUnroi

Quit trying to be a smartass when all you're is just an ass. Can't believe that you represented our country once, SHEESH. 🙂 https://t.co/TGbX2A5ksM

Disclaimer vera.
Hope Suresh give some befitting reply to this fellow. https://t.co/DNEzV90u7z

Can't believe this guy was a professional player. Cheap. https://t.co/ejAuSuvd9x

Did not expect this from such a reputed man like sehwag paa. Everyone knows what Raina was going through and the reason he didn't play. Embarrassing https://t.co/0D3nUcqSfY

This ain't funny though. https://t.co/OADgXzUUg8

Yall and this BALCONY
Idk why this shit started
Man lost a family member +covid is scary with a young son
God it's not funny anymore it's just not https://t.co/vb2Nxc6wWg

RCB Got Hilariously Trolled After Thanking Punjab For Maxwell !!
Natty Replied To People Who Abused Him After Watching “Karnan” !!
Advertisement