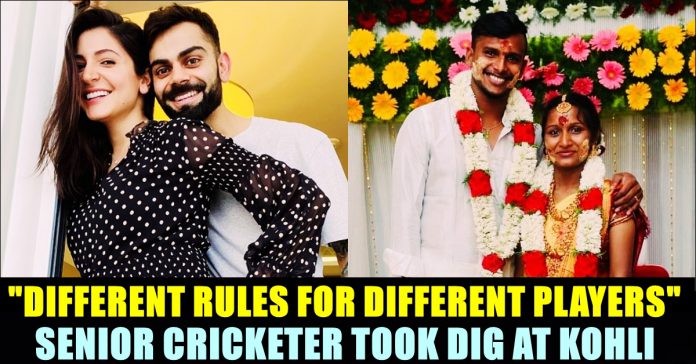 Former Indian player and current commentator Sunil Gavaskar took a deep dig at Virat Kohli for leaving team India to look after her wife who is going to give birth to their first child. The former opener had said that there is a divide within the team and pointed out how Natarajan is forced to stay back in Australia as a mere net bowler without seeing his daughter who born during IPL playoffs. Players of team India left Dubai and reached Australia directly to play the ODI, T20 and test series. Sunil had hinted that there are “different rules for different players” in Indian team.

Gavaskar also said that any other country would welcome a bowler who has more than 350 test wickets and four test centuries. He said that Ashwin is being sidelined if he fails to take wickets in one match where established batsmen are getting chance after chance even if they fail repeatedly. “For Ashwin the rules seem to be different” said Sunil.

While talking about Natarajan’s forced inclusion as net bowler for the test series, Sunil said “Another player who would wonder about the rules but, of course, can’t make any noise it as he is a new comer. The left arm yorker specialist who made an impressive debut in the T20 and had Hardik Pandya gallantly offering to share the man of the T20 series prize with him had become a father for the first time even as the IPL playoffs were going on” he said.

“He was taken to Australia directly from the UAE and then looking at his brilliant performances, he was asked to stay on for the Test series but not as a part of the team but as a net bowler. Imagine that” Gavaskar wrote in his piece.

“A match winner, albeit in another format, being asked to be a net bowler. He will thus return home only after the series ends in the third week of January and to get see his daughter for the first time then. And there is the captain going back after the first test for the birth of his first child. That’s Indian cricket. If you don’t believe me ask Ravi Ashwin and T Natarajan” his column read.

Previous articleHere’s What Actor Vijay Said After Watching “Thangam” !!
Next articleTop Hero Refused To Hurt Sonu Sood For A Scene !!