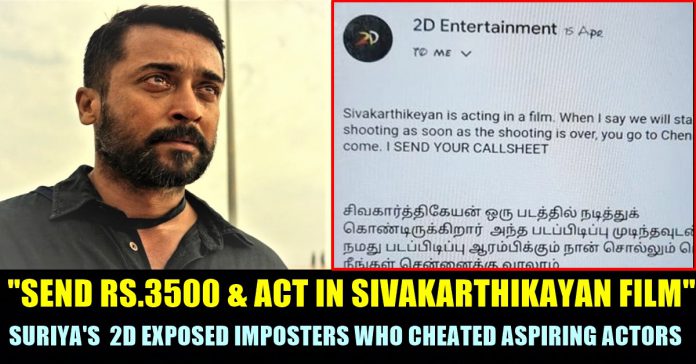 2D Entertainment Private Limited has posted an imposter alert on Twitter. The post is regarding the fake auditions. They have made a fraudulent claim on a person for faking like the production company and spreading unauthentic news about auditions for movies.

2D Entertainment Private Limited is a production and distribution company set up by Surya in the year 2013. The company includes Rajasekar Pandian, Actor Karthi, and Actress Jyothika as its key people. The company has produced and distributed a good lineup of movies.

In the tweet, 2D Entertainment Private Limited has distinctly explained the fake audition calls and asked people to be cautious. They have mentioned the mail ID that’s circulating fake audition calls. As per the tweet, the mail ID, 2dentertainment.gokul@gmail.com has been created for this purpose. They have used the logo of the production house. The hoax messages of auditions have not only interested credulous people but have also demanded some amount from them. Screenshots of conversation over the email sent to people are also included in their tweet thread.

In their tweet thread, they have made it clear that they (2D Entertainment) never conduct direct auditions. Further, they have said that the auditions for the movies under their production, will be carried out by the director’s team in their office. It is also mentioned that the production house never charges for the auditions conducted. They have informed that they are going to lodge a police complaint against the fraudster for misusing the company’s name, logo and for betraying the naive people.

In their ending tweet, they have made a request to the people to be aware of these imposters. People should be cautious and verify the veracity of these emails before sending the specified requirements. This tweet has also been posted to spread awareness among people.

2D Entertainment Private Limited does not conduct any such auditions directly. All auditions for our projects are conducted only by the respective Director’s team in their respective offices. We do not charge any payment for auditions.

We hereby request the general public to exercise utmost caution & care and not to share any personal and confidential information without verifying whether such emails and offers for auditions are bonafide and genuine.

Following the tweet by the Entertainment house, regarding the fraudulent emails and calls, many have replied with their personal encounter with fake audition calls and messages. Tweets regarding the fakeness of these emails are also put forward. Some have cautioned other people to be aware of these emails. A couple of people have also asked for movie updates.

These guy’s are still around?😁 This happened to us in Bangalore and my friend is the victim who paid 5k and lost it… These guy’s have a big network they click photos with actors.. keeping those pictures they cheat.

Previous articleTop-Tier Celebrities Raised Voice For Arivu After He Got Sidelined By “Rolling Stone Magazine”
Next articleArya Finally Opened On The Mental Trauma He Went Through Due To The Cheating Case !!