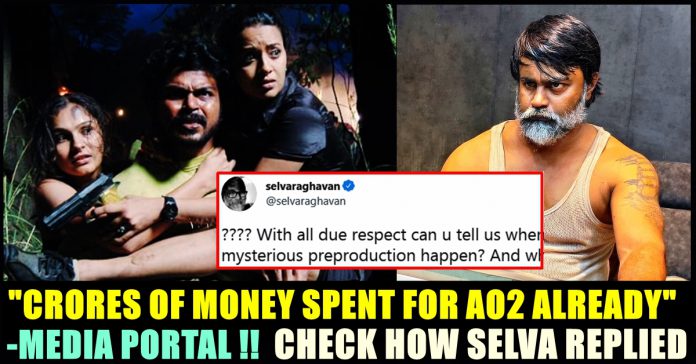 Director Selvaraghavan who is going to turn actor through Arun Matheshwaran’s “Saani Kaayitham” and Vijay-Nelson Dilipkumar’s “Beast”, reacted to a baseless news that said that the filmmakers one of the upcoming films “Aayirathil Oruvan 2” got shelved due to budget issues. Selva, brushed off the rumour directly after seeing it in the micro blogging social media site. The filmmaker asked the media portal to identify him the film producer they mentioned in their piece.

Selvaraghavan, one of the most influential filmmakers of Tamil cinema, was born in a Tamil family to film director Kasthuri Raja and Vijayalakshmi. He has a brother, Dhanush, an actor, and two sisters, who are both doctors. The filmmaker’s reply to the media portal went viral in no time with many criticizing media for spreading fake reports in public.

Venturing different genres in his filmmaking career, Selva is known for his romantic dramas such as Mayakkam Enna, 7 G Rainbow Colony, Kaadhal Konden. His gangster flick Pudhupettai is considered as a film ahead of its time and his period drama Aayirathil Oruvan and Fantasy love drama Irandam Ulagam are also boasting a separate fanbase. Recently the filmmaker announced that he is going to make sequel for his blockbuster film “Pudhupettai” by having his brother in the lead role. On the special day of 2021 new year event, Selva announced about the sequel of his “Aayirathil Oruvan” with Dhanush.

Aayirathil Oruvan got re released in some of the prominent theatres in Tamil nadu recently and garnered huge reception with fans lauding the intelligence of the filmmaker for making such an intriguing film during 2010. Many fans termed the project as “Magnum Opus” and compared it with Telugu blockbuster period film “Bahubali”.

On the new year day, director Selvaraghavan came up with a tweet and surprised his fans by confirming that Aayirathil Oruvan 2 is in cards. “இது வரை கேட்டிருந்த ,காத்திருந்த என் அன்பு உள்ளங்களுக்கு இதோ உங்கள் முன்னால்” wrote Selva and added a posted by tagging Dhanush to indicate that he is going to play lead in the film.

Now, a news portal named “Chennai Times” made a news saying that the project got shelved to the excess amount that was spent during pre production. The report said that Aayirathil Oruvan 2 is a big budget film and the makers have already spent crores on research and pre-production. It further said that the makers of the project are bit skeptical on continuing the project.

Check out some of the reactions for Selva’s clarification tweet :

It’s good to see that fake media news are exposed by the concerned Celebrities now .

"Cooku with Comali" fame Kani who got married to director Thiru of "Theeratha Vilayattu Pillai" and "Samar" fame, reacted to the comments surfaced in...