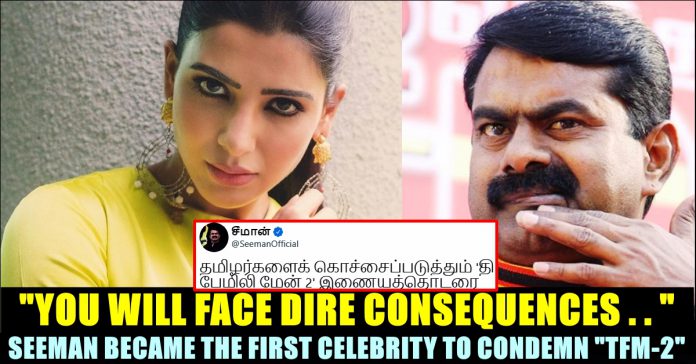 Throughout the trailer of the “Family man 2”, we could see Samantha wearing the uniform of the Liberation Tigers of Tamil Eelam (LTTE). The dialogues also suggests that there is a hostage situation in Chennai. It has been reported that most part of the website is taking place in Chennai. LTTE also known as Tamil tigers is an organisation that attempted to establish an independent state for Tamils named “Eelam” in Sri lanka.

As soon as the trailer of “The Family Man 2” released in youtube, reactions praising the Tamil nadu based actress Samantha Ruth Prabhu flooded the social media platforms. Along with thousands of fans, Samantha’s husband and Telugu Superstar Naga Chaithanya, Bollywood actress Kangana Ranaut heaped praise on the 34 year old actress. However, people who are aware of the issue, started expressing their disappointment over the “Kaththi” actress for taking up a role of an extremist from Tamil roots.

Hashtags such as “Family Man 2 Against Tamilians” were trending in the micro blogging social media site since the evening of Tuesday. Now, Seeman became the first recognised individual from Tamil film industry to raise voice against the makers of “The Family Man 2”. “The visuals featured in the trailer of the web series ‘The Family Man 2’, which is set for release on Amazon Prime, are shocking. The
series seeks to intentionally portray the LTTE as terrorists and Thamizhs as vicious people. It is no coincidence that Chennai has been chosen as the location. The story revolves around an Eezham woman who is portrayed as a militant. The color of her dress resembles that of an LTTE uniform,
with dialogues referring to links between the militant group and the Pakistani 1SI.” the press release of “Naam Tamizhar” leader read.

“In a situation where 2 lakh Thamizhs in Eezham have been slaughtered by the tyranny of Sinhala chauvinism, the attempt to portray the Thamizhs as terrorists through a web series that stand as the greatest democrats and seeking justice in the international forums through moral and legal struggle is highly condemnable. As soon as the trailer of the series, which was created to mislead Tamils, was released, Tamils all over the world have been registering their condemnation with great anger. It is completely unacceptable to release this web series, which fails to feature the humanitarianism of the LTTE that stood with high morality even when the Sinhala chauvinist regime violated the conventions and rules of war through barbarian attacks, use of cluster bombs, chemical weapons and massacring a large number of Thamizhs.” he added.

“Therefore, I urge that the series be banned, which fails to portray the Thamizh people on the brink of extinction with the greatest wounds and injustices inflicted, rather characterizing the Thamizh
people as terrorists. Already, the films such as “Inam” and “Madras Café” that portray Thamizhs ina wrong manner were refrained from screening in theatres due to widespread opposition; Similarly, the airing of The Family Man 2 web series should be canceled. I warn that there will be dire consequences if The Family Man 2 web series that tries to misrepresent Thamizhs across the country is released.” read the press release of the Director/Actor/Politician.

Previous articleFans Slammed BCCI After Seeing The Drastic Difference Between The Salaries Of Women & Men Cricketers !!
Next articleHashtag “Crocodile Tears” Trending At Top In Twitter !! You Know Why

Sun Pictures Asked Sorry To Fans After The Teaser Release !! Check Out The Reason !!

After delivering superhit Mersal, Tamil superstar Vijay is all set to enthrall his fans once again. Yes, we are talking about Sarkar, the actor’s...