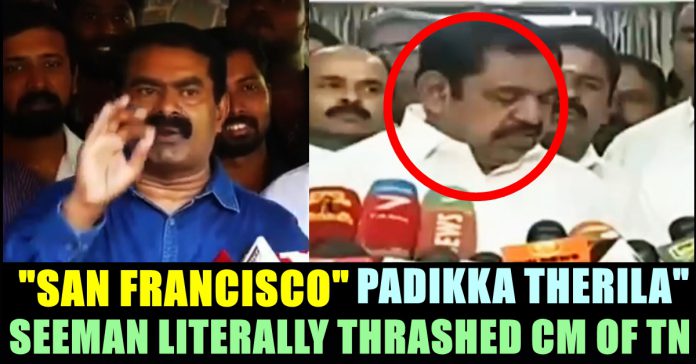 Nam Tamizhar party leader Seeman trolled chief minister Edappadi Pazhaniswamy for his literacy skills in a recent press meet. His speech occured as the reflection of recent announcement regarding board exams for 5th standard and 8th standard students.

The Tamil Nadu government on Friday announced the introduction of board exams for Class 5 and 8 students, from this academic year onwards.The proposal for board exams in these classes was made in the recently released draft National Education Policy of the Central government. Even as there were much public opposition to the proposal and the draft policy is not yet finalised, the state government has announced the decision.

A source from the School Education Department told Express, that no student will be detained up to Class 8 for the next three years (until 2021-22). However, students who fail in these exams will be detained in the same class after 2022. This decision will break the no-detention policy until class 8, which Tamil Nadu government has repeatedly advocated in the past.

In this recent press meet, Seeman said that after the insistence of Central government, Tamilnadu government should have consulted it with highly educated educators. “There is no necessity for Tamilnadu to implement it before any of the Indian states” he said.

Seeman even insisted the ministers of educations to pass the exams of 5th standard and 8th standard. “They could not even read San Francisco and Los Angeles by reading it in paper” said Seeman referring to a press meet of Chief minister Edappadi Pazhaniswamy.

This video is going viral in Internet with hilarious reactions Check out some of them here :

‘You are not even able to read Los Angeles and San Fransisco from a piece of paper. What is the need of such exams!?’ – Seeman..

What a frank opinion about AIADMK ministers. #Seeman pic.twitter.com/uE2GyQkauI

Super super slipper shot to slaves…. Waiting to see all the brainless spineless slaves after 2021 May or Before!!!… They can't think for MC too🤣🤣🤣#Seeman @NaamTamilarOrg @SeemanOfficial @KASengottaiyan @EPSTamilNadu