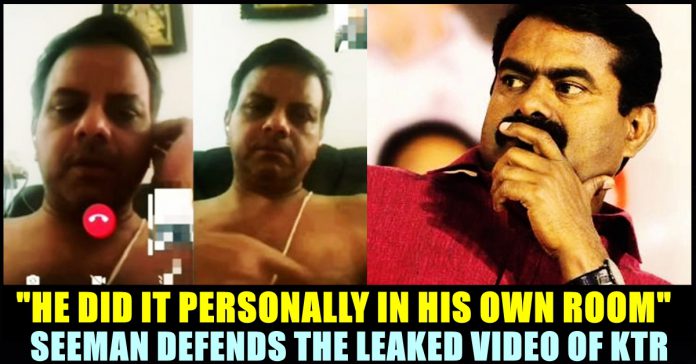 Days ago, Journalist Madan who is known for working in news channels as an anchor and reporter, came up with a video in his youtube channel “Madan Diary”, accusing BJP’s senior leader and spokesperson K.T Raghavan of sexually harassing women by using his power. He attached the screen recorder of one of the video calls of K.T Raghavan and a woman which shows the former indicating the woman to remove her cloth.

“Members who have 25,30 years of experience in the party are involving in sexual violations and it’s not being brought to light is the worst scenario” Madan said before releasing the video of K.T Raghavan. “They are not being exposed because the victims fear their position in the party. As they are also ruling for the past 7 years, they are using their influence to silence the victims. The party’s own members say that K.T Ragahvan has been involving in such activities since very long time” Madan said in his video who added that he has been busy working on this sting for past few months.

As soon as the video released, condemnations started pouring from all the directions of the Internet. Now, to our surprise, NTK leader Seeman, in a press meet, said that nothing wrong in what Raghavan did. “Keeping instruments in his bed room and bathroom without his knowledge is punishable crime. The one who released it should get arrested and actions should be taken against him” Seeman said in the press meet.

“Did he commit something that no one in the world did ?” Seeman said and referred to an incident where a politician was accused of watching po*n film in an assembly. “He did it in his room and you people are making a fuss about it. It gives me a fear whether our society is getting ruined. Watching who is talking to whom, what they are talking, recording it is not going to help them in any way” said Seeman in the video.

A 42-year-old woman was allegedly gang-raped by five men on Saturday, first in a house in Gurugram’s Bhangrola village and then in a moving...