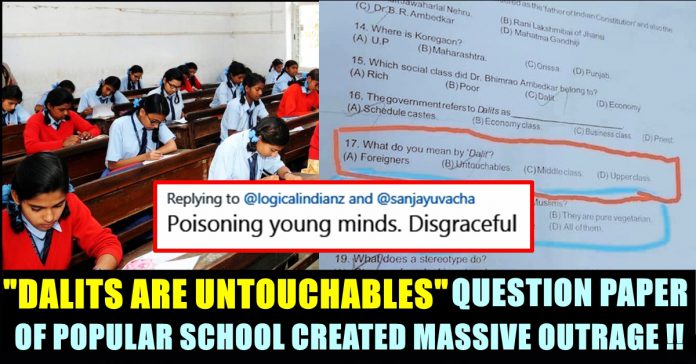 In this modern era where most of the youngsters believes that Casteism does not exist, we can see the people from the same age group embracing their caste which is evident through their second name in their personal social media accounts.

Several number of youngsters have started taking to social media to glorify and deify members of their community involved with caste-based violence, including murder. They have also taken to using memes and selfie videos to spread messages of hate against other communities. Members of those communities too retaliate in a similar fashion on social media, mainly WhatsApp and Facebook. Even freedom fighters and leaders, respected across the board like Kamaraj, Ambedkar are targeted.

Now, in a way of adding fuel to it, a picture is doing rounds in twitter where we can see a question paper asking 6th standard students who dalits are. The options given to answer this question are toxic to the core. “Foreigners, Untouchables, Middle Class, Upper class” are the options given to the students. It also contained question about the common stereotype of Muslims.

This picture created huge outrage in Twitter as people started slamming the school management for framing such questions. Check out some their reactions here :

What are our Children learning now ?? @sanjayuvacha . This is Class 6 Kendriya Vidyalaya Question Paper !!! Please read it !!! pic.twitter.com/ijdqKrmkvT

Kendriya Vidyalaya question paper for class 6! What have we come to?

Kendriya Vidyalaya question paper.
This is the Sangh education strategy on display.
Forget chandrayan. This is where we're headed. pic.twitter.com/J5rrI8zduI

Saw this as a 6th std kendriya vidyalaya school qn paper (don't know the credibility of the source )
Yet , wtf ya #opposecasteism #Ambedkar #KendriyaVidyalaya pic.twitter.com/EgS5D5Gi43

In my 12 years of schooling at various Kendriya Vidyalayas across the country , I never had to see something as bizzare as this. If this is really a question paper from a KVS school , something is seriously wrong with the mindset of people handling these institutions.

This even gained the attention of DMK leader Stalin who expressed his opinion by writing “Shocked and appalled to see that a Class 6 Kendriya Vidyalaya exam contains questions that propagate caste discrimination and communal division. Those who are responsible for drafting this Question Paper must be prosecuted under appropriate provisions of law.” in his official twitter account.

Shocked and appalled to see that a Class 6 Kendriya Vidyalaya exam contains questions that propagate caste discrimination and communal division.

Those who are responsible for drafting this Question Paper must be prosecuted under appropriate provisions of law.@HRDMinistry pic.twitter.com/kddu8jdbN7

However, some sources also suggests that the particular school mentioned never prepared such question paper and the management has nothing to do with what is spreading now. What do you think on this ?? Comment your views below !!

Raju Jayamohan of "Kana Kaanum Kalangal" fame has been crowned as the winner of Bigg Boss season 5 after he received highest number of...