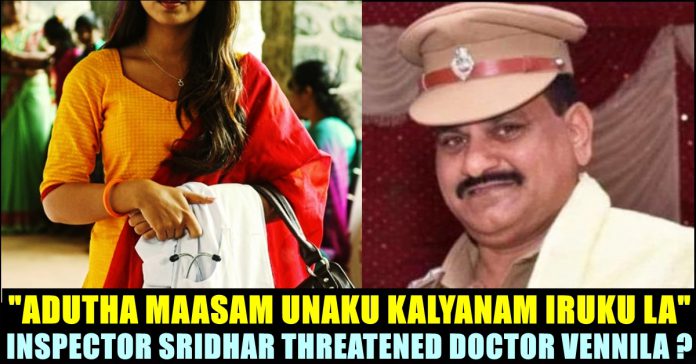 “Inspector Sridhar and other cops Saamathurai, Muthuraj brought them to the hospital around 7 30 AM on 20th of June. After few minutes, Sub inspectors reached the spot. That time itself I predicted that they gave them a severe beating. Both of them were breathing heavily and sweating at that time. Blood pressure was in an increased state. Till 9 30 non communicable disease test was taken. I said that they have to get treatment by staying in hospital to be alive. But they said that they have to remand him immediately. When I got angry and insisted on giving them threatment, Inspector Sridhar who was sitting by the table threatened me” said doctor Vennila in her confession.

“We heard that you are getting married next month. We are Police. Remember that you are coming from Nagercoil alone to work here and give them the certificate” said Sridhar to Doctor Vennila according to Nakkheeran. Sub Inspectors also pressured me to give them the certificate but I refused. That’s when I received a phone call from my higher authority, Doctor Adhit Kumar phoned me. He asked to produce them a fake certificate. Without having a choice, I sent them by providing a fake medical certificate for Jayaraj and Fenix” said Vennila.

“However, I advised them to make Jayaraj and Fenix rest a bit to decrease the blood pressure. They (cops) listened” confessed Vennila. She also gave a small note to the authorities who interrogated her. While sending them to jail, Jailor asked about the crime Jayaraj and Fenix did. For that Sathankulam police officers reportedly said that they tried to “assault” police officers.

Five police officers linked to Sathankulam lockup murder have been arrested under Section 302 of Indian Penal Code. Sub-inspectors Raghu Ganesh and Balakrishnan were the first two to get arrested regarding the case. The three others which includes Inspector Sridhar, were locked up in Peroorani’s jail in Thoothukudi district initially and later transferred to Madurai central jail.

Previous articleFollower Threatened To Kill Himself For A “Hi” Reply !! Aditi Responds
Next article“Your Boyfriend Was A DJ In A Pub” -Follower On Yashika’s Post !!

In a way of countering to a popular twitter trend "Nan Than Pa Rajinikanth" in 2018, fans and followers of Superstar today trended "Nan...