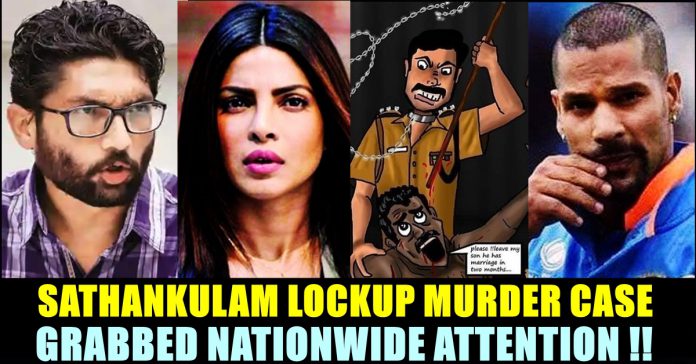 Followed by Kollywood celebrities, the horrific lock up death of Jayaram and Bennix in Sathankulam of Thoothukudi made people across the country to mourn and react in a furious way. Days after the report on the custodial death of the father and son duo surfaced, known faces and influential personalities across the country who are having huge number of followers for their official social media accounts, started raising their voice. They are requesting public to join hands together to seek justice for the injustice took place. The main reason behind this nationwide attention is a video made by singer Suchithra who narrated the whole incident in English language, to make everyone understand.

Actress Priyanka Chopra who currently works for hollywood film industry, condemned the act of the police officers and said “No human deserves such brutality, whatever be their crime.” Further she added that she cannot imagine what the family is going through and asked people to join together to seek justice. Many other celebrities including Shikar Dhawan, Harbhajan Singh, Taapsee reacted to the issue.

This might just be one case out of many but it takes only one case to begin the snowball effect. #JusticeforJayarajAndFenix
It could’ve been anyone we know. Details are scary and gut wrenching.

Every single life matters. We should make sure that this act of brutality is meted out with justice, and I am not sure justice will be any solace for the family of #JeyarajandFenix and my thoughts are with them.

The tragedy of the custodial deaths in Tuticorin should be a wake-up call to all of us who turn a blind eye to police brutality:https://t.co/rnSZSwWSGp
Compare the outrage the death of #GeorgeFloyd sparked across the world, w/the lack of national outrage here. Justice denied?

Dear Bollywood celebrities, have you heard what happened in Tamil Nadu or does your instagram activism only extend for other countries? The George Floyds of India are far too many. The story of such police violence & sexual abuse is just heartbreaking. #JusticeForJeyarajAndFenix

I couldn’t even listen to this whole video. Grotesque and gruesome. The cops involved need a harsher punishment than just a transfer 😡😡 #JusticeForJeyarajAndFenix https://t.co/WaoNSIS8ur

Horrified to hear about the brutality inflicted upon Jeyaraj & Fenix in Tamil Nadu. We must raise our voice and make sure justice is given to the family. 🙏 #JusticeForJeyarajAndFenix

The brutal custodial killings in Tamil Nadu should shake every citizen. Why have criminal charges not been filed against those police officers for their criminal, barbaric and depraved killings? Why are our TV channels silent? #JusticeforJayarajAndBennix

Earlier, almost, every tamil actors and politicians raised voice regarding the issue. It all started on the night of Friday when the Police personnel from the Sathankulam station, who were on patrol duty, reportedly pulled Jayaraj up for running the shop beyond the permitted time. When police attacked Jayaraj, Fenix who questioned against the police brutality against his father, got beaten by at least 5 police officials including the sub-inspector and constables” said Ravi one of his friend.

For The First Time, Kajal Agarwal Posted Her Picture Without Make Up !! Her Followers Lauding !!

Ever wondered how Kajal will look without makeup? Well, the actress posted a picture of herself without makeup in her official social media accounts....