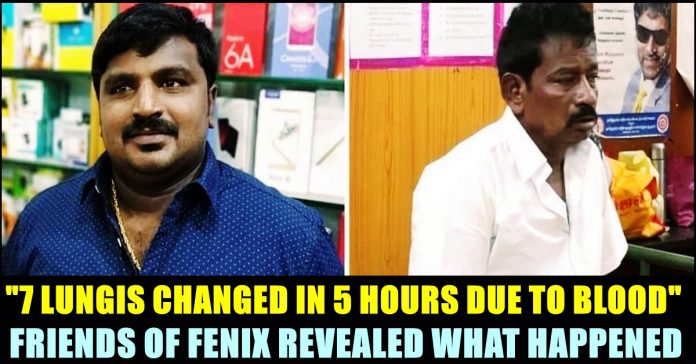 The custodial death of father and son duo created huge outrage across the state. Shops around the Sathankulam area were closed after traders association announced shut down to condemn the cruel act of the police officials. Police have suspended two sub inspectors and transferred an Inspector, reacting to the incident. However, Protesters demanding for a highest possible punishment for the police officials who caused the death of the father and son. Now, to our shock, a recent report emerged in The Federal said that Jayaraj (59), Fenix (31) were sexually tortured by the police officials.

Friends and lawyers of the victims who witnessed the incident in person, while talking to the media, recounted the horrific sequence of events. Police have asked Rajkumar to bring their own vehicle to transport Jayaraj and Fenix from Police station to Sathankulam government hospital. Rajkumar says that he was unaware of the sexual torture until he witnessed them coming out of station with torn pieces of cloth and were covered in blood.

“They complained of severe pain in their rectums. We immediately gave them a lungi and spread a thick cotton cloth on the car seat, so that it would not hurt them” rajkumar said. However, the given lungi became wet of blood soon after they sat on it. So the friends gave them another set of lungis before they entered the hospital, Rajkumar said.

Jayaraj and Fenix were asked to have something to reduce the blood pressures by the doctor. “The doctor tested them thrice between 7 : 05 am to 11 am, but the blood pressure didn’t reduce. They were also given tablets and injections thrice. We pleaded to the police to give them medicines to stop the rectal bleeding, but the police said the bleeding would stop without medicines”. the advocate said.

The inspector of Sathankulam police station Sridhar asked the doctors to give a fake certificate on their fitness level. After receiving the certificate, the police took the duo on the same car to Judicial P saravanan’s house. “We told Fenix to reveal whatever they did to him to the magistrate but he was afraid and said that the police have threatened to ruin his entire life if he reveal anything to the magistrate” Rajkumar said.

After that the duo was taken to the Kovilpatti sub-jail which is 100 kms away from the police station. Fenix told Rajkumar that the police officials are beating him for no reason. “It hurts more than the external injuries.” Fenix said to Rajkumar and asked him to take care of his mother and requested his mother not to inform about the custodial torture.

It all started on the night of Friday when the Police personnel from the Sathankulam station, who were on patrol duty, reportedly pulled Jayaraj up for running the shop beyond the permitted time. When police attacked Jayaraj, Fenix who questioned against the police brutality against his father, got beaten by at least 5 police officials including the sub-inspector and constables” said Ravi another friend.

On the night of the same day, when Ravi and Rajkumar managed to sneak into the police station, witnessed Fenix being naked and fully covered with blood. Throughout the night, the duo cried for help and people who are residing about 500 metres away from the station heard it.

Previous articleAtlee Is The Main Reason For The Boost In Vijay’s Career ??
Next articleHeart Wrenching Complaint Letter Of Fenix’s Mother !!

Veteran actress Sripriya who is known for pairing up with Kamal Haasan and Rajinikanth, along with several other twitter users, called out Archana as...

Court ordered Aishwarya Rajinikanth to appear in court regarding a case filed related t0 the smoking scenes that took place in the 2014 released...