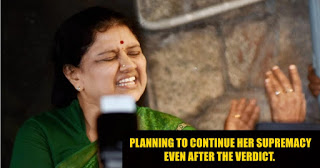 The supreme court’s verdict on the 14th of February came as a dreaded blow to Sasikala, after she was sent to square one amidst all drama happening around the AIADMK party in Tamil Nadu.

The Supreme Court, which has finally issued it’s verdict after a due date of 8 long months accusing Sasikala of amassing more than 200% wealth than her income. The news came as a shocker after she was all set of taking the throne to herself, a plot that was hatched recently.

After the death of Jayalalitha, Sasikala told to the public that she has no interest in the throne and would look after the party as it’s general secretary. Later her ideas changed when she started to show interest in her hot seat, especially after her verdict’s date in the Supreme Court has been nearing, more faster than ever.

The verdict which was sentenced today came as a heart felt blow to the Sasi party. Even after the court has sentenced her to surrender in the Bangalore court by the evening of 14th of February, Sasikala has shown no interest in doing so. She seems to be withholding the queen’s throne, expecting orders to be obeyed and wishes to be fulfilled.

Her lawyers have announced that since Sasikala is unwell, she’d need a month’s time at the least to undergo proper medical assistant. This has been going on in many a politician’s life after an important jurisdiction has been delivered. Maybe Sasikala has to learn it the hard way. If not surrendering she maybe pulled to jail by force, sources say.

Previous articleHere’s What Sasikala Did Before Judgement Day-Ten Facts
Next articleMeet The Judges Who Were Responsible In Sending Sasikala To Prison. Know About them In Detail Here !

“Aishwarya Rajesh With Her Mother” This Media Page Posted A Picture !! Check How Aishwarya Reacted !!

Online fans are always desperate to know about the details of their favourite celebrities. Using this opportunity there are plenty of fan pages and...