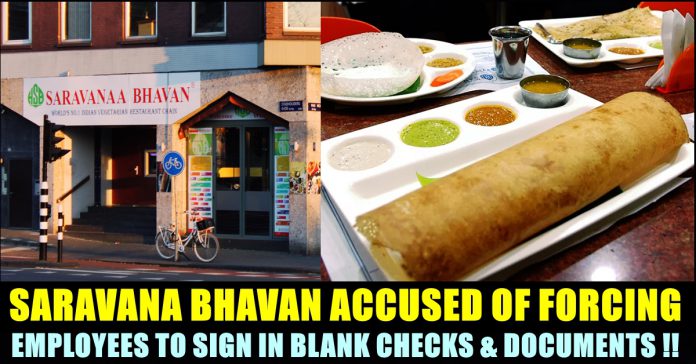 Saravana Bhavan, the largest South Indian restaurant chain in the world, is now accused of forcing employees against their will. The 39 year old restaurant is a household name and have more than 39 locations in India (30 in Chennai) and 87 across several countries in Southeast Asia, Australia, New Zealand, the Middle East, Africa, Europe and North America. Now, a restaurant that is located in Amsterdam of Netherlands has been subjected to controversy for forcing workers to do many things against their will.

According to the Het Parool , the passports of the Chefs in the Amsterdam branch were taken and they were forced to work for more than 12 hours a day for 6 straight days in a week. Even in their “day off”, they were forced to be in the kitchen from 7 :00 AM to 12 :00 PM. The monthly salary of the chefs was 700 euros in cash, the report says.

It is also reported that the chefs were forced to sign blank checks by the hotel authorities. They were used to pressure the chefs if they were in the way. To recover the cost from the rebellious employees, managers made them to sign blank but official documents in order to fill them later as per their wish. The Parool report suggests that it was done to keep the employees under their control.

The report further suggests that the restaurant is open for a week now despite of the ongoing investigation. An operating license has been applied by a new franchisee under the same restaurant name in August. The municipality of Amsterdam which doesn’t want to confirm whether this is happening now, has only given temporary permission for the restaurant to open until a final decision is taken.

Meanwhile, a twitter user named as Sander Philipse has claimed that the hotel management only recruited Tamil speaking chefs and made sure that the front of house consisted only Hindi and English-speaking students. The user said that it was done to resist chefs from communicating with people and to restrict them from knowing about their rights. He also accused Saravana Bhavan of following the pattern internationally.

They recruited only Tamil-speaking chefs, while making sure front of house consisted of Hindi and English-speaking students, making sure the chefs had no one to communicate with or to tell them what their rights were. Apparently this is a pattern for SB internationally.

This news made many other people in the micro blogging social media site to react as well.

Saravana Bhavan in Amsterdam mwas forcing its chefs to work 75 hour weeks, paying them only 700e a month, keeping hold of passports and bank cards and forcing them to sign blank expenses sheets that the employer could fill in and force them to pay later. https://t.co/nVvnjOIxu6

To all my non-Tamil friends, please avoid Saravana Bhavan. Apart from all the serious offences committed by the establishment (that should deter you by itself), you will find better sambhar, dosas etc. I promise. https://t.co/wfaWA51My6

Beloved vegetarian Indian restaurant Saravanaa Bhavan Amsterdam closed its doors a year ago for a 'renovation'. The real reason was they were being investigated for labour exploitation.https://t.co/tGKdLRP4IZ

Saravana Bhavan in Amsterdam is shut down because they didn't follow the labour laws. Passports taken away, chefs made to work longer than 12 hours/ day and also on off days. Severely underpaid. Such a shame!

In another incident of double murder, an elderly couple was found dead at their farmhouse in Sekkadu, near Avadi. According to police, 50 sovereigns...

Actor Suriya opened for the first time regarding the controversy that is taking place in social media for the past three days. Even since...