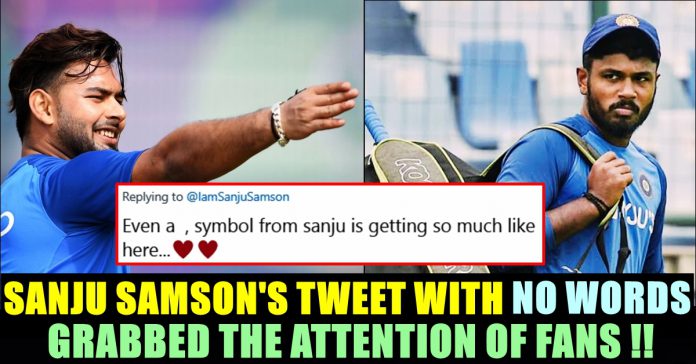 Sanju Samson has became the darling of Internet for his simple yet meaningful tweets for past few days. The young cricketer who has been receiving a constant rejection from the selectors of Board of control for cricket in India, has been posting tweets with emojis and punctuations.

After former captain and wicket keeper MS Dhoni made himself unavailable since the semi finals of World cup 2019, selectors of Team India made Rishabh Pant as a prominent wicket keeper. Rishabh Pant, a 21 year old young lad has not been very much impressive with his batting skills and his wicket keeping abilities are far from effective.

As we can see, Sanju has played only 2 twenty 20’s despite making his debut in 2015 whereas Rishab Pant has played 11 tests, 16 ODIs and 28 T20 International matches. It is notable that Pant made his debut only in 2017, 2 years later than Sanju Samson.

Nowadays, cricketers are expressing their disappointment over the selection committee through their cryptic tweets. Last year, when Indian team announced the squad for world cup, Ambati Rayudu mocked the decision of picking Vijay Shankar instead of himself with his 3D glasses tweet.

Sanju Samson also expressed his disappointment through a tweet for not getting a place in team against West Indies series. (Read : Sanju Samson’s Single Tweet After His Omission From Indian Team Says Lot !!) Now he has posted a tweet in his official twitter account and grabbed the attention of the user of the social media site.

Now the 25 year old cricketer has posted a single comma in his tweet, not a full stop but a comma. Check out his tweet below :

This tweet from the cricketer garnered more than eleven thousand love reactions and Thousand four hundred shares so far. “Understood it’s not a full stop , it’s comma , game on!!” wrote one of his follower. Check out some of the reactions for his tweet below :

Even a , symbol from sanju is getting so much like here…♥️♥️

Yup its not the end.
Keep scoring big,your time will come❤️

Smash all domestic bowlers, specially md Siraj and khaleel Ahmed whenever u play against them…at least Kohli should realise his poor scouting talent

What do you think on this tweet of Sanju Samson and the reactions he is receiving ?? Comment your views !!