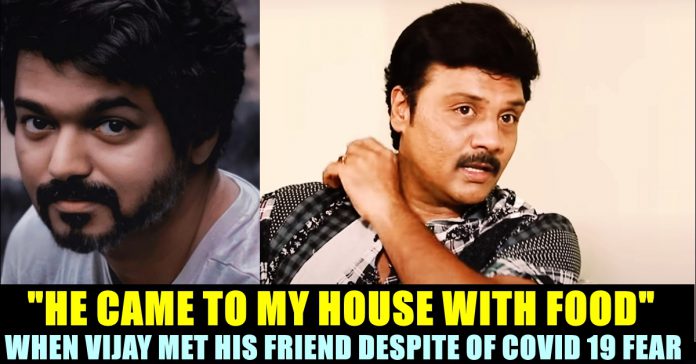 Actor Sanjeev who is a long time friend of Thalapathy Vijay appeared for an interaction to talk about his friendship with the “Bigil” actor. Sanjeev who studied with Vijay in Loyola college, acted with him in some of his earlier films such as “Nilave vaa”, “Badri” etc. After that, Sanjeev went on to excel in TV serials and gained widespread fame after acting as “Selvam” in “Thirumathi Selvam” serial. He also hosted shows and audio launches.

Now, after a long time Sanjeev is going to share screen space with Vijay in his upcoming “Master” and shared about his role in the film. The actor said that he is going to appear in a very minor role in “Master” but said that he feels happy for the re-union that took place after a very long time with Vijay in films. He also shared about the moments he spent in the shooting spot of “Master”.

Sanjeev who talked about the early days of himself with Vijay as friends, shared an interesting incident where Vijay came to meet him despite of the COVID 19 fear. Sanjeev said that he felt a bit feverish recently and sent his wife and children his mother-in-law. “I suspected that I could have got infected with COVID 19. I sent my wife and children to her mother’s place and lived here alone.” said Sanjeev who went on share about Vijay’s phone call.

“Vijay called me at that time. He asked me what happened after knowing about my health from my wife. I said “yes” and let him know about my fear of COVID 19. He asked me whether I have tested or not. I said that I am going to get tested the next day. Then he asked me about what am I going to eat. I said that I would cook rice as it is the only dish I know how to cook. After 15 minutes he called me and asked me to come down” said Sanjeev.

“I refused to go near him as I had a doubt of being infected with COVID 19. He said that he bought food for me through phone. After I firmly refused to go near him due to the fear of transmitting him the virus, Vijay asked whether our watchman is wearing a mask. Then he gave the food to the watchman. I said “bye” to him from far. That is the only time I saw him in the past 5 months.” Sanjeev said in the video.

Sanjeev further reacted to the issue being created by Meera Mitun, a controversial personality. He said that the fame being gained in negative publicity would not last long. Sanjeev also shared about the emotional welcome he presented during “Mersal” audio launch and about him calling Vijay as “Avan” Ivan” in public.

Previous articleAmritha Aiyer Wants Her Followers To Comment On Her “Teeth” !! Check Their Response
Next articleFollower Wants This Actress To Go Through A “Nose Surgery” !! Check Her Reply

People from across the country are protesting against the Citizenship Amendment law, since it was passed by the Parliament. It has been reported that...