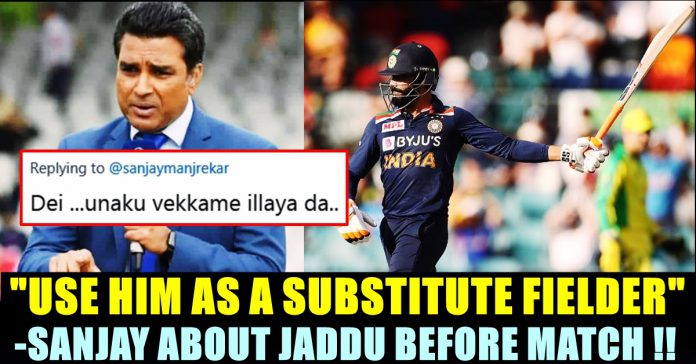 Sanjay’s Tweet About Jadeja Getting Attacked From All The Directions !!

India lost the ODI series against Australia but ended it with a win which is a good sign for the upcoming T20 series. If the Blue army keeps the winning momentum with them, they would definitely clinch the T 20 series. In the final ODI, Virat Kohli, after winning the toss, decided to bat first and posted 302 runs on the board. Though the top order of team India collapsed, Hardik Pandya and Ravindra Jadeja stood for an 150 run partnership and helped the team to reach the decent total.

Jadeja scored 66 runs from 50 balls and one more time proved his batting skills. He also picked a crucial wicket of Australian captain Aaron Finch who could have done the damage. “A day to remember” the cricketer’s tweet after winning the match read.

As soon as the left handed shined in the field, fans remembered the tweet posted a Sanjay Manjrekar against Ravindra Jadeja days ago. While picking his team for the first ODI, Sanjay left out Jadeja and added Kuldeep in his place.

On seeing this tweet, a follower said that Jadeja’s fielding ability would add more value to the team. “You can’t bench him in Australian conditions” he added.

Jadeja as a fielder add more value and cover all departments, specially in Aus conditions you can't bench him..

Use him as substitute fielder first chance you get. 😉 https://t.co/xb1Wx73af7

Now, the left hander who has been performing well throughout the series, did sword celebration after scoring a half century while Sanjay Manjrekar was doing commentary. Fans who are aware of the past, started roasting the former cricketer for degrading Jadeja.

Sanjay Manjrekar on commentary when Jadeja hits Abbott all over the park#INDvsAUS pic.twitter.com/vMRyvuKQ51

When jadeja hits 2 sixes and Manjrekar is in the commentry and he doesn't have anyother option other than to praise him !! #INDvsAUS pic.twitter.com/eRx1tIJfo2

Things are getting out of hand between Jadeja and Manjrekar. pic.twitter.com/fG911phxDL

When you will learn some mannered lessons Sir ?@imjadeja has always been the best Allrounder of our time. “I beg your pardon” has always been your regular Say, so please keep it simple as possible. Little respect as you are an Ex Indian player

The rift between Sanjay and Jaddu took place when Sanjay Manjrekar said “I am not a big fan of bits and pieces players which Jadeja is at this point of his career in 50-over cricket. In Test matches, he is a pure bowler. But in 50-over cricket, I would rather have a batsman and a spinner,” during the 2019 world cup.

This statement irked the cricketer who immediately replied to him through his official twitter account. In his tweet Jadeja told Manjrekar to learn how to players who achieved. “Still i have played twice the number of matches you have played and i m still playing. Learn to respect ppl who have achieved.i have heard enough of your verbal diarrhoea.@sanjaymanjrekar”

Previous articleDhanush Absolutely Hated Nayanthara In This Blockbuster Film ?? WATCH
Next articleVJ Parvathy Replied To Those Who Body Shamed Her !!

On the auspicious day of Vinayagar Chathurthi, Actor Suriya came up with a biggest announcement in Tamil cinema history. The actor who earlier released...

Actress Anaswara Rajan who is known for her work in "Thanneer Mathan Dinangal" film, recently found herself amidst hateful comments for a picture she...