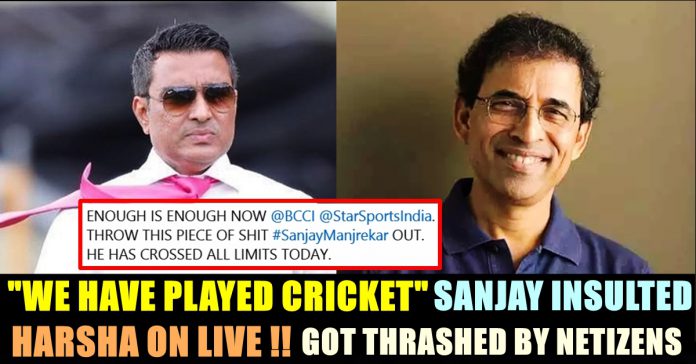 Former cricketer and current commentator Sanjay Manjrekar who is known for his open statements in social media has once again came subjected to severe criticism due to his differences of opinion with his fellow commentator Harsha Bhogle. Sanjay Manjrekar earlier made a fan to write letter against him to ICC for his biased commentary.

In the first ever pink ball test match played by India and Bangladesh, India won the match with ease. Meanwhile the argument between Harsha Bhogle and Sanjay Manjrekar creates waves in social media in favour of Harsha Bhogle, a cricket analyst who hasn’t played any cricket in his life.

During the match, in commentary, Harsha Bhogle insisted on asking the players about the experience in playing with a pink ball. To his statement, Sanjay Manjrekar said that there is no necessity for it. “You need to ask Harsha, for us who have played the game, will get a fair idea on what’s happening out there” said Sanjay which created ruckus in social media.

Harsha bhogle and Sanjay manjrekar having a difference of opinion on live tv pic.twitter.com/0TTSLQDCvO

This attitude from Sanjay Manjrekar earned him a severe hatred where people started demanding his ban from commentary. During the world cup tournament fans did not like the biased statements towards the Indian batsman while they were at the crease. On seeing his commentary many tamil celebrities including Anirudh Ravichander, Singer Srinivas, Siddharth got irritated and expressed their frustration through their official twitter account.

Check out some of the reactions on Manjrekar’s statements :

Harsha Bhogle should hav told #SanjayManjrekar ,

"if you weren't a cricketer, you would have never made it to the commentary box" #Facts

ENOUGH IS ENOUGH NOW @BCCI @StarSportsIndia.
THROW THIS PIECE OF SHIT #SanjayManjrekar OUT.
HE HAS CROSSED ALL LIMITS TODAY.

#SanjayManjrekar has played exactly the same no of cricket matches with the pink ball as #HarshaBhogle. There wasn't anything wrong in what HarshaBhogle said & Manjrekar had no business being rude on air. Never liked him when he was playing, will never like him commentating. 🙄 https://t.co/c7Ho1fmSav

Some people want Devendra Fadnavis to be the CM

Others want Uddhav Thackeray to be the CM

Who do we have to bribe to get Sanjay Manjrekar removed from @StarSportsIndia commentary team.

Harsha Bhogle, graduated in IIM university is finest cricket speaker and termed as "Voice of Cricket" and he's famous all over the world though he's not played a single game.
Who's "Sanjoy Manjerkheer" 🤔#SanjayManjrekar #HarshaBhogle pic.twitter.com/Suz3QWB4Le

What do you think on the way Sanjay Manjrekar behaved with Harsha ?/ Comment your views below !!

Previous articleGirl Supported The Delivery Guy Who Asked Woman To Wear Shawl !! Chinmayi Reacts !!
Next articleTracker Said That The Look Of “Thalaivi” Is Stunning !! Actress Reacts !!

Is Kavin “The Professor” Of Kollywood ?? Check His Reply !!

Fans for La casa De papel aka Money Heist is increasing in India in daily manner. As the fourth season of the series released...

Thala Said “I Looked Exactly Like You While Doing My First Film” Mahat Opens For The First Time !! Watch Video !!