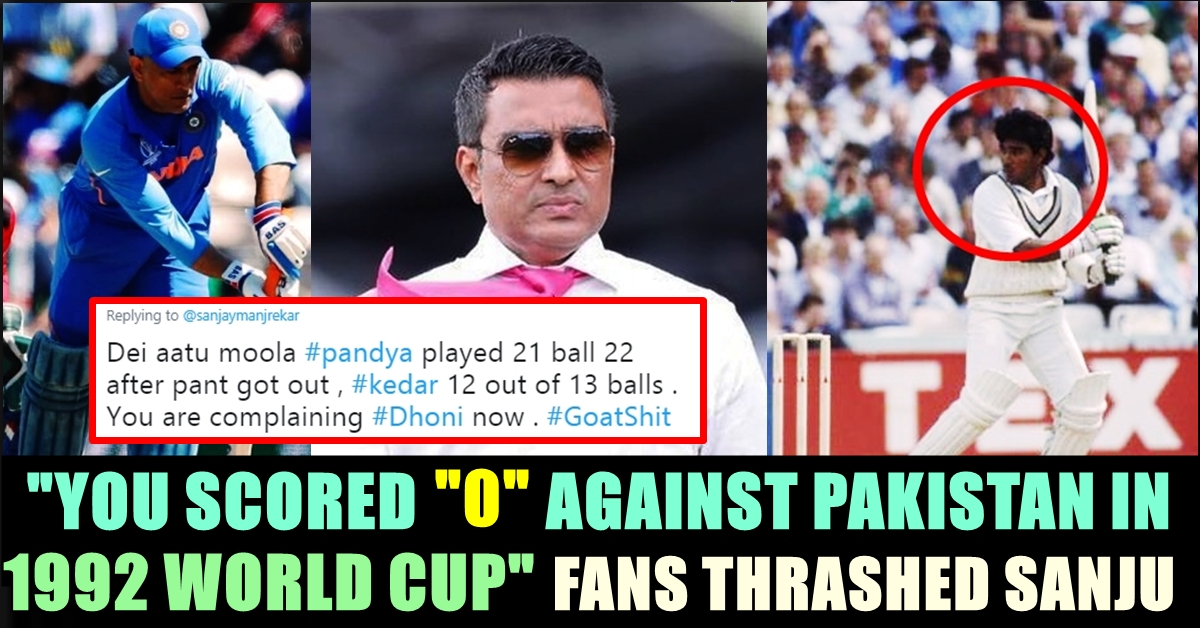 MS Dhoni has been facing the heat once again over his slow and unorthodox approach after his 31-ball 42 run knock against England. In a pressure chase of a mighty 338-run target, Dhoni was the last saviour for India but he failed to get the Men in Blue over the line. The Virat Kohli-led side were handed their first defeat in the ICC World Cup 2019 by the hosts, who kept their hopes of qualifying for the semi-finals alive with a convincing victory. Former cricketer and current commentator Sanjay Manjrekar who is known for his open statements in social media has once again came up with a strong statement against Dhoni. He even made a fan to write letter against him to ICC for his biased commentary. After seeing Dhoni’s slow paced innings Sanjay in his official twitter account wrote “If there was any team that had the ability to stop India’s winning run. It was England. Dhoni’s approach in the last few overs however was baffling. 🤔”

If there was any team that had the ability to stop India’s winning run. It was England. Dhoni’s approach in the last few overs however was baffling. 🤔 Dhoni came out to bat in the 40th over with India needing 138 runs from 65 balls. At a time, when he was required to play at a certain strike rate to keep the required run rate under a check, the veteran batsmen could not accelerate well in time. After Hardik Pandya’s departure in the 45th over, India were left with a mountain to climb in the chase and what baffled fans was Dhoni’s approach. However after seeing this post from Sanjay, twitter followers of him got irked and digged the past of the cricketer to criticize him. Check out some of their reactions :

Says the man who scored 0 against Pakistan in the 1992 World Cup. STFU. Enough of your BS! Your hate for Dhoni has been consistent since the IPL. According to you 27-1 in 10 overs was OK chasing 338? #Dhoni #INDvENG #CWC19

The biggest mystery is how you get to be a commentator

Did you bat faster?

When will you stop doing commentary ? Serious disgrace.

Okay. Commenting is not as difficult as playing out there.

Vijay Shankar Ruled Out Of World Cup Due To Injury !! Here’s How Fans Reacting !!
Siddharth Wanted Ambati Rayudu In Team Instead Of Mayank !! Fans Slammed Him For His Cricket Knowledge !!