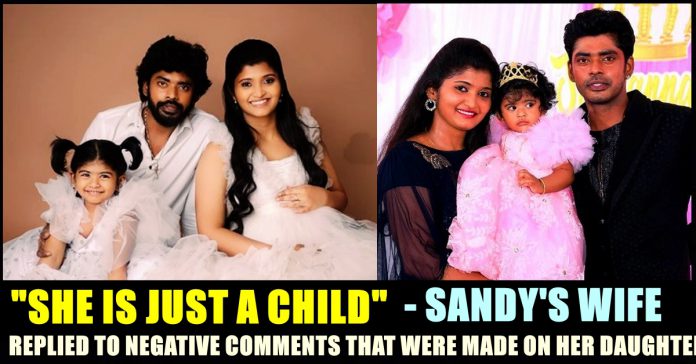 Dance choreographer Sandy’s wife Dorothy Sylviya reacted to negative comments that were made on one of her children. Exposing the abuser, Sylviya said that her daughter is just a child and worried about how the society has started to pressure her. The abuser commented on the weight of the child and said that she would be able to dance like her father Sandy only if she reduced her weight.

Sandy, after entering the entertainment industry through “Maanada Mayilaada” show as a choreographer, became one of the prominent dance masters in the Kollywood film industry. He taught dance to Rajinikanth in “Kaala”, Kamal Haasan during “Bigg Boss” promo and worked in the recently released blockbuster “Sarpatta Parambarai” as well. On 20 August 2017, he got married to his longtime girlfriend Dorathy Sylvia. Sylvia was Sandy’s student when they started dating according to reports and They have a daughter named Tasha. Sylviya rose to fame after entering the Bigg Boss house during “Freeze Task” with her daughter. She recently gave birth to her second child.

Dorothy Sylviya is pretty much active in Instagram with two and half lakh followers. She has been uploading the pictures of herself with her family in her Instagram timeline. Check out some of her recent posts below :

Commenting on one of her posts, an Instagram user named “Salma Mymoona”, said that the baby looks “thick” like her mother. “If I question about it, body shaming supporters will come in for this person’s support” Sylviya replied by uploading a story. “I seriously don’t understand. Why is it ? Always a woman who puts down another person”

In another screen shot Sylviya added, we could see the commenter saying, “Let the baby be slim, so that she can dance like “Sandy” master”. Sandy’s wife uploaded a screen shot by sarcastically adding a “clap” emoji.

“She is just a child. Now itself the society pressure has started. Let’s build a healthy community for our future generation. Not a one that always has time for criticizing others ! Find the gold in mud” Sylviya said in her next story, in a way of expressing her dejection.

It is high time for people to mind their own business while surfing social media platforms. Just because an individual maintains his/her profile in public mode, it doesn’t mean that they could be subjected to troll/criticisms/hatred. Comment your views on the way Sylviya handled the online user !!

Bollywood’s Karan Johar Got Trolled For His Statement About KGF!!

Renowned Bollywood filmmaker Karan Johar became a subject to severe online troll after making a statement on how critics would have reacted if a...