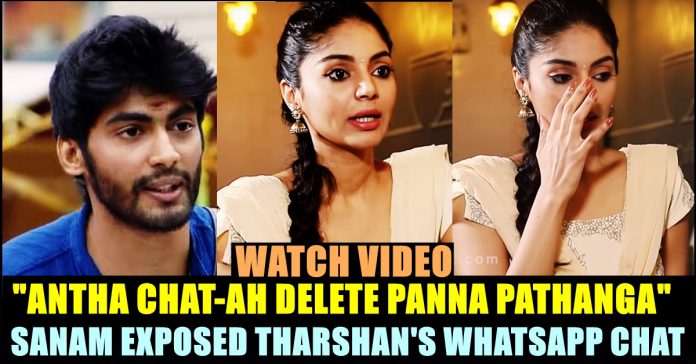 After the press meet of Tharshan, popular actress and model Sanam Shetty appeared for the first time in a face to face interaction. The relationship between herself and Tharshan became a talk of social media users as the accusation Sanam came up with shocked them. It all started when Sanam shetty registered a police complaint against Tharshan for cheating her. She has filed complaint against Tharshan for cheating, fraudulent, breach of trust, women harassment and threatening in the commissioner office, Chennai.

Sanam Shetty who decided to answer Tharshan’s press meet, has appeared in a video interview. In the interview, sanam Shetty has revealed about how Tharshan avoided her since the very day he came out of the Bigg Boss show. “He met me only two times in my house after his Bigg Boss stint, that too under my compulsion. He would reason many things to avoid me and would always say that he has commitments if I ask him to give me a chance to prove myself.” said Sanam shetty in the interaction.

On Tharshan accusing her for giving interviews with Bikini, Sanam said that he himself captured her in Bikini several times. “Before Bigg Boss, when we were staying in a hotel in Pondicherry, Tharshan captured 50+ photographs of myself in Bikini and edited them. He would select the photos to be uploaded at that time which was before Bigg Boss” said the actress.

Further, Sanam shetty went on to reveal about the behaviour of Tharshan after their engagement. She said that Tharshan had an affair with another girl even after getting engaged with her. “When we were together, I happened to see a text message popup saying “Hey Sexy” with an heart emoji in Tharshan’s phone. When I asked him to show me the phone, he tried to delete the chat. Then I got the phone from him and read their conversation which started before 1 long month. They both were involved in an intimate conversation which literally broke me into pieces” said Sanam who revealed that they even talked bad things about herself in their conversation.

Comment your views on this interview of Sanam Shetty !!

Previous articleAngry Cheran Gave His Award Back For This Reason !!
Next articlePriya Anand’s Bold Statement About Acting In These Kind Of Advertisements !!

Emerging Player Shubman Gill who is currently opening for Gujarat Lions captained by Hardik Pandya, replied to trolls who criticized him for his slow...