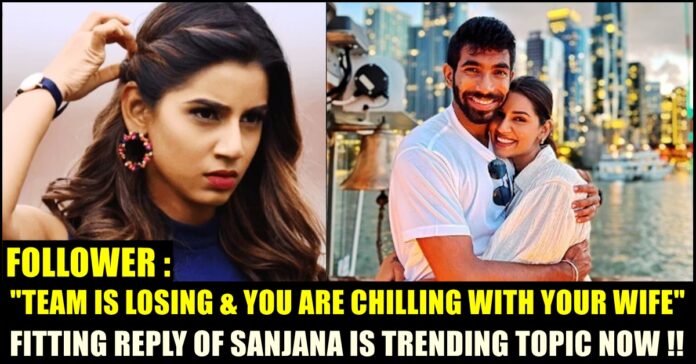 Sanajana Ganesan Shuts Down Troll That Attacked Her Husband !!

Sanjana Ganesan, wife of prominent Indian pacer Jaspirit Bumrah defended her husband by replying to a troll in style through Instagram. A user of the photo/video posting social media app criticized Bumrah based on a recent post that his wife uploaded in her official Instagram handle. The user said that the cricketer is chilling while team India is going through a tough phase in the ongoing Asia cup tournament.  Replying to that comment, Sanjana called the user a “fool” and highlighted the “throwback” hashtag she added in the post.

Due to the fitness issues, Bumrah, a star pacer of team India is not a part of the current Indian team. He has been rested for the tournament, considering the upcoming busy schedule of team India, including the T20 world cup tournament that is going to take place in 10 months time.

On Sunday, the team lost a crucial match to Pakistan and many fans believed that his presence would have made an huge impact in the game in favour of his team. In the meantime, Sanjana Ganesan, a famous television anchor and sports presenter whom the cricketer got married, on Monday, came up with a post in her official Instagram handle.

The post showed a picture of the dup posing for a picture together sitting on a boat. “just a lovely #throwback photo of Jasprit, me and Jasprit’s sneakers (the real stars of this picture) 👟” read the caption of her post.

Irrespective of the hashtag “Throwback” many followers of Sanjana started making harsh criticisms against the duo, especially referring to the absence of Bumrah in the national team while the team is struggling. In a way of replying to one and all, Sanjan picked one troller and replied to all of them.

“Waha India ki m**-b**** pade hui hai or yeh gum rahe (The team is in dire straits there and these two are vacationing).” read one comment of a follower to which Sanjana replied back saying “Throwback photo hai, dikhta nahi kya chomu aadmi (It’s a throwback photo, can’t you see you fool”.

The comment garnered wide reach with many prominent media portals making news about it. Many other followers flooded the comment section after memes were made based on Sanjana’s reply as a result of which she came up with a story elaborating about the same.

“While I do think it’s important to stand up to internet trolls and bullies, I do not agree with dragging someone’s religion, nationality, ethnicity or identity into the matter and I sincerely urge you to consider doing the same” Sanjana said through her story.

“Internet trolls aren’t the way they are because of their religion, ethnicity or
nationality, it’s just a lack of common sense. I promise to keep trying to make the
internet a better place, taking down one chomu aadmi at a time” she further added. 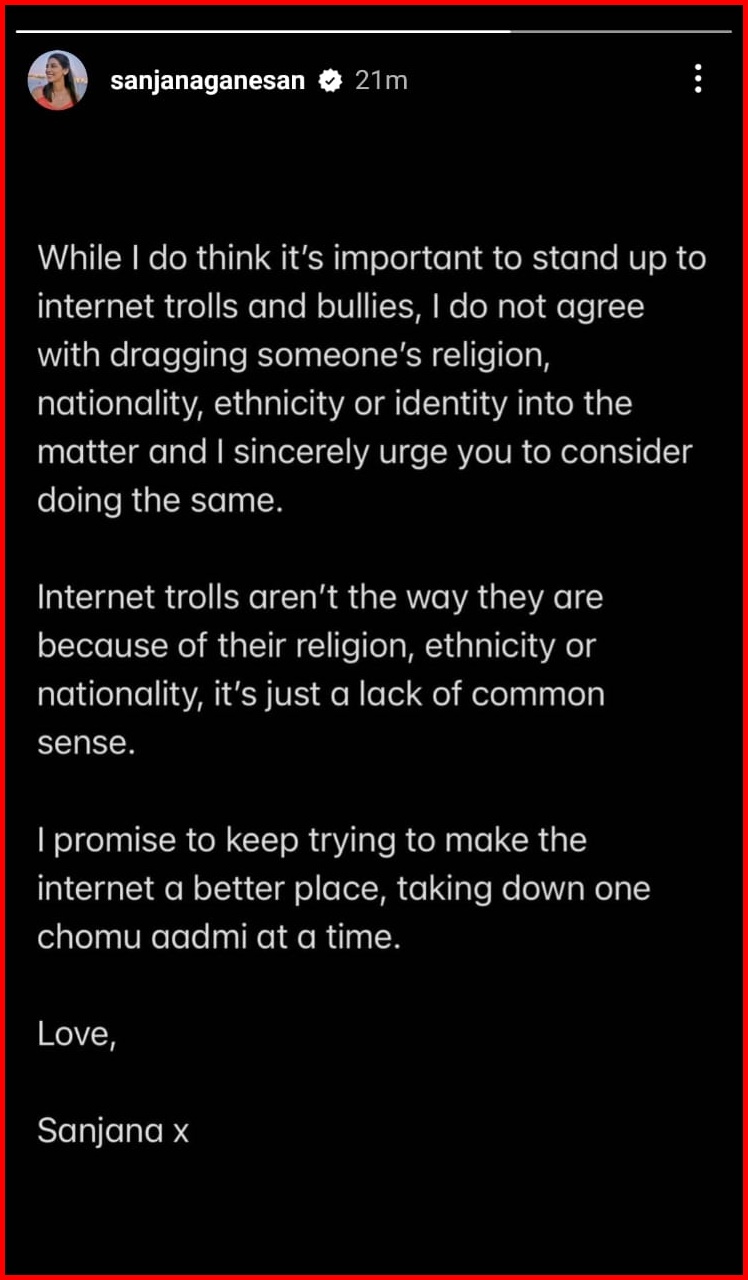 In a horrific incident, an 8-year-old girl was allegedly abducted, raped and killed by two men in Nawada district in Bihar. Police have detained...