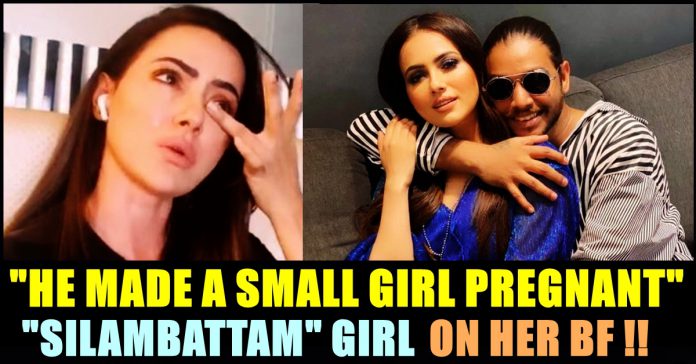 Sana Khan is known among Tamil audience for appearing in Silambarasan’s Silambattam. She played as one of the lead actress in the film and went on to participate in Bigg Boss show of Hindi version where she gained more fame. The actress who recently made it public about breaking up her relationship with choreographer named as Melvin has now accused him of impregnating a small girl.

Sana Khan began her career in modelling and went on to appear in advertisements and feature films. She has appeared in Hindi, Malayalam, Tamil, Kannada and Telugu language films, TV commercials, dance performances in films in special appearance. About breaking with her boyfriend, Sana Khan said that he had relationships with multiple girls and mentioned him as “compulsive cheater” and “compulsive liar”.

This is my first n it has taken a lot of courage from me to come out n speak the truth. Coz there were so many people who believed in this relation n showed so much love n respect but unfortunately I didn’t get it from where I should have gotten. This man is dirt n he is disgusting unfortunately it took me a year to find out coz I believed in him blindly. I have taken a stand for myself coz if I won’t no one will 🙂 He is a compulsive cheater n a compulsive liar n this is his regular thing to do with everyone for his fame n popularity. This is the original content with no fabrication but be ready for the covers on this 🙌🏼 Ps: cheated on me with multiple girls since may/June which I lately discovered but there is one girl tht shocked me the most n I knw her #shameonyou miss **** I will def tell the world ur name so atleast others knw u before they collab with you 🤮 Upbringing matters a lot 👊🏼 He wanted to marry me and have babies what would he teach my son n daughter??? #toxicrelationship #cheappeople

Days later, Sana Khan posted an Instagram story, accusing her former boyfriend of impregnating one of his dance student who is a small girl. “It’s heartbreaking to know he made one small girl pregnant, took money from girls, flirted with students. Is that how a teacher should be? Scares me! And these so-called actors, my foot! How proud their parents must be now! Characterless people. That’s why they are all strugglers. Allah will teach you all a lesson that I will watch and I know it,” she wrote in her story.

Check out the screenshots of her story here :

However, Melvin who is reacting to these posts in an indirect way, has insinuated that Sana’s allegations are false. He is yet to make a direct statement regarding her accusations.