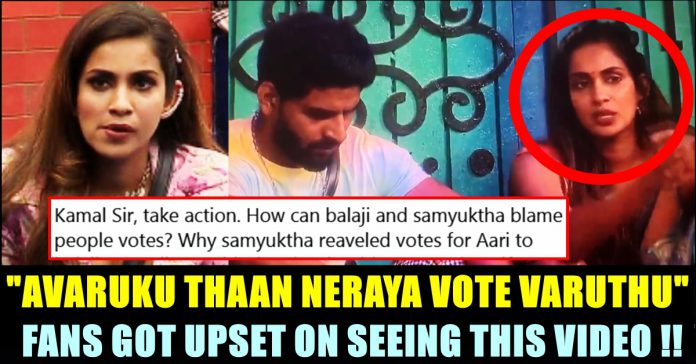 On seeing Samyuktha revealing about the voting stats to Balaji Murugadoss inside the Bigg Boss house ahead of the grand finals, netizens who are following the show for 100 long days got extremely angry and venting their emotions out by slamming the duo in social media platforms. In the video which is widely being circulated, we can see Samyuktha explaining Balaji about how many votes Aari is getting every week. She also reveals what people are talking about him outside the Bigg Boss house.

Bigg Boss Tamil season four is all set for the grand finale and the final week sees the old contestants who got evicted from the show making their entry again as guests. Archana Chandhoke, Aranthangi Nisha, Jithan Ramesh and Rekha re-entered the house to meet their old buddies. Samyuktha, Mirchi Suchi, Sanam shetty, Anitha Sampath, Vel Murugan also made their presence inside the house.

All the contestants are pouring love on each other and at the time the finalists were expected to look tensed about the result of the finals, Samyuktha, one of the evicted contestant talks to Balaji Murugadoss about the voting statistics and hints him about who could be the winner. Ramya Paniyan, Soma shekar, Rio, Aari Arjunan, Gabriella are the six finalists and the winner will be determined through the number of votes they are getting from the audience throughout this week.

People who are following the show for 100 long days are eagerly waiting to witness the winner of the Kamal Haasan hosting show. Meanwhile, Samyuktha, while conversing with her close buddy Balaji Murugadoss, says that the number of votes Aari is getting from the audience is drastically high comparing to the other contestants. “Epdinney therla semma high ah iruku da” she says to Balaji during their conversation.

“Don’t know how, the number of votes he (Aari) is getting are extremely high” says Samyuktha to which Balaji responds by asking about the state of the finale week. “If all of you are getting 1000 votes, he alone gets 4,000 votes” she says. “If you go by the voting system, Aari is the one who will win the finale except something drastically happens this week” she further says before adding “Last week that was the status”.

“Why they opted six finalists if he is getting that much votes?” Balaji asked to Sam. After that, they started conversing about public’s opinion on the entry of Balaji’s brother and the body builder says that there is no logic in people thinking that he changed his behaviour because of his brother’s advise.

Bigg Boss is highly believed to be a show that is being conducted by keeping the contestants away from the outside world. On seeing Balaji gathering each and every information including the voting stats from Samyuktha, fans of the show got extremely upset. “Is this an ethical way to play the game @vijaytelevision ?? How is it fair to reveal the voting stats to a finalist??” asked a fan out of anger.

Is this an ethical way to play the game @vijaytelevision ?? How is it fair to reveal the voting stats to a finalist??

And Samyukta you still continue to be the biggest Sombu ever. Now don’t react when ppl ask you why you support Balaji. #BiggBossTamil4 pic.twitter.com/aa6bsOGDio

Definitely, it will backfire balaji votes. Why samyuktha did this to her friend bala?

Samyuktha leaked about voting status to Balaji. Isn't that against rules..This season sucks

@vijaytelevison Samyuktha is revealing voting status to Balaji. Is it not a rule breaking thing? Also will that not affect Balaji's play? This season there are lot of rule breaks and nothing is been questioned. #BiggbossTamil4 #BiggbossTamil

Kamal Sir, take action. How can balaji and samyuktha blame people votes? Why samyuktha reaveled votes for Aari to balaji?? Totally unethical.. Why should we vote then, if contestants samyuktha archana ramya disrespected our votes @ikamalhaasan @EndemolShineIND @vijaytelevision https://t.co/p8V8NWY9OK

Now we believe #Samyuktha and #Balaji are NOT a group…nambittom! 😂🤣😂😂😂🤣😂😂😂😂😂#BiggBossTamil #BiggBossUNSEEN

Previous articleGirl Confirmed That The Public Opinion Video Was Scripted !! WATCH
Next article“Kasi Theatre” Got Punished For Allowing More Than 50% Occupancy !! Check Out The Fine Amount