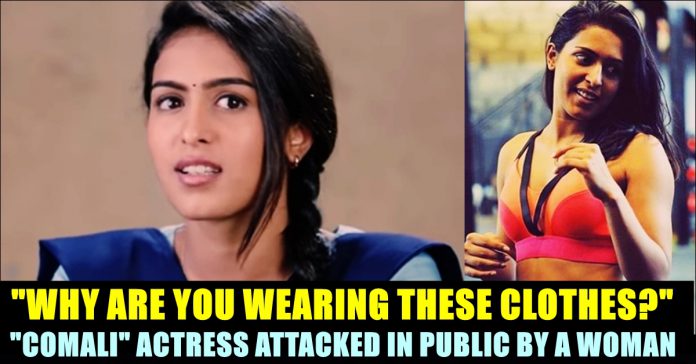 Actress Samyukta Hegde, a Bangalore based actress who is known among Tamil cinema audience for appearing in a recent blockbuster “Comali” attacked by public in a daylight for her clothes. On the evening of Friday, Samyukta Hegde, with her friends visited a park to get their dose of sun and fitness in a public park near Agara lake at HSR layout. The actress said that she was practicing hoola hoops and her other friends were doing their work out when an elderly lady, named as Kavitha Reddy came and abused them for their clothes in the choicest of language.

In need of some Vitamin 😀 🌞 . . . PS: you all need some too, don’t forget to check in with the sun everyday. #goodmorning #thebarefeetchronicles #samyukthahegde

“Are you cabaret dancers ?? What sort of clothes you were wearing ? As*h***s !! If you wear such clothes and something happens to you the next time, don’t come crying to anyone” said the elderly lady who abused them more, according to the actress. As soon as the elderly lady started abusing them, 10 boys joined her and threatened her that they would get her name fixed in the ongoing drug scandal.

Then the 10 boys surrounded Samyuktha and her friends and locked them in followed by which the elderly woman charged towards her friend and assaulted her. “I taped all this on camera. We were then for colt taken to the local station and she continued ranting against us. One of the cops thankfully said that we have done nothing wrong and sent us off”. the actress said.

“The future of our country reflects on what we do today. We were abused and ridiculed by Kavitha Reddy at Agara Lake. There are witnesses and more video evidence. I request you to look into this” wrote Samyuktha in her tweet by tagging the Bengaluru city police.

The actress who got deeply disturbed by this incident said that she was attacked and abused by the woman for simply wearing workout clothes. “That too in central Bengaluru amidst broad daylight, she attacked us. What wrong did we do to go through this trauma ? It’s high time we questioned such behaviour where people play moral police and torture them without reason. And we hear of such incidents so often. This has got to stop” the actress said.

Watch the video the actress uploaded in Instagram below :

Actor Sundeep Kishan of “Maanagaram” posted a tweet saying that what the elderly woman did was so wrong.

Comment your views on women being attacked for their clothes !!

Previous articleFor The First Time Kiran Opens On The Bikini Song In “Winner”After 17 Years !!
Next article“So You Want Them To Pick Garbages Forever ?” Old Video Of Vetri Criticizing A Short Filmmaker !!

BIGG BOSS Nithya Said That She Has Admin For Her Twitter !! Check Actress Kasthuri’s Reaction !!

Complaint Filed Against DMK’s Senthil Balaji Over His Comment On “Sand Mining” !!

The ruling party AIADMK filed a complaint with the chief electoral officer against DMK's Senthil Balaji for allegedly threatening government officials while addressing the...

Varma has been renamed as "Adithya Varma" by the crew members. Actor Banitha Sandhu of October fame will join actor Dhruv Vikram as the...