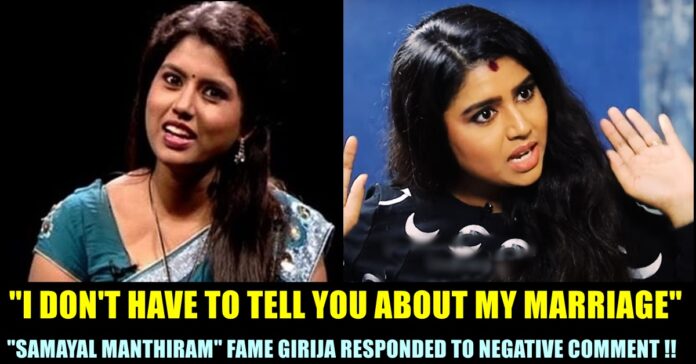 Television host Girija who is known among the television audience through hosting a show named “Samayal Manthiram”, in a recent interview with Indiaglitz, has opened on the abusive message she received from her social media followers. Girija said that those abusive messages that are being sent to her, only denotes the relatives and family members of those abusers. In the interview, Girija also talked about how she got married and about spending time with her new born baby.

“Samayal Manthiram” is a show that telecasted in Captain TV for people who have doubts in their sex life. Dr. Arun Chinniyah, a renowned sexologist would appear in the show to clear the doubts of the viewers. Girija hosted the show and would ask questions to the viewers based on their doubts.

Girija, in the interview, said that no one in her surrounding has made her feel uncomfortable just because she did the show “Samayal Manthiram”. The Television anchor who got married now, said that one required to sacrifice their life to marry her.

Answering to a question on facing negative comments in social media, Girija remembered about a young guy who dropped an obscene comment on her 5th month pregnancy shoot. Girija said that she asked him to know about why “5th month” pregnancy is being conducted and also said that she has no necessity to inform the public about her marriage date and all.

“He immediately apologized to me saying that he commented that way after seeing many people commenting on the same way. He apologized to me with his whole heart and I said that he looks like a good boy and asked him to maintain dignity in social media platforms* Girija said in the interview.

About men using abusive language to demean women, Girija said that the words are referring his mothers and sisters. She said that kids are learning such words through the fight between their parents and others in public. Girija also addressed about the lack of sex education for the students in out country.

In the interview, Girija said that she got married to the editor who worked in Captain TV and her Instagram timeline is filled with the pictures of her baby. The Television star said that she is extremely happy nowadays after her child’s birth and feels proud to be called as a “Mother”

Previous articleNorth Indians Atrocities In Reserved Compartments !! Train Delayed For One Hour !!
Next articleFather Made His Daughters Write Public Exam By Hiding The Death Of His Wife !! Heart Wrenching

Two students have been reportedly killed by lightning at Anakaputur on October 31. The two students Lokesh (19) and Kishore(17)  were using their phone...