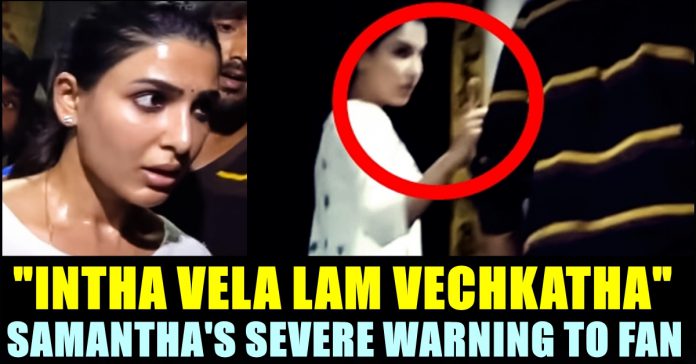 Fans rushing towards celebrities to witness a glimpse of them in public is common. Nowadays, instead of just seeing them and getting an autograph from them, fans highly prefers to take selfie and videos of them in order to keep it as a memory. Though many celebrities would allow their fans to take pictures and videos, few would feel awkward while being captured by strangers without concern, especially during their private times.

The latest one to get irritated by a fan is actress Samantha who is currently busy in Telugu film industry. The actress who went to Tirupati temple to offer her prayers to lord Thirumala after her successful Telugu venture 96, was disturbed by a fan throughout the pathway it seems. Samantha is known for speaking her heart out to her followers in social media and now did the same in person as well.

As we all know, Samantha is one of the prominent South Indian actresses who never shied away from expressing her opinions in Public. Be it right or wrong, she always gave fitting replies to her trollers and abusers. The actress who noticed a fan recording her in his phone for a long time, took moment to warn him by saying “Look . . If you are walking, walk aside. Don’t capture photos and all”. The actress communicated with him in Tamil and the fan backed off right away. (Also Read : Samantha Replied To Those Who Questioned About Her Pregnancy !!)

This particular video is doing rounds in social media platforms with various kind of reactions. Samantha is basically born and brought up in Chennai, Pallavaram. Despite her mixed regional background, she has cited herself as a Tamilian. Samantha was schooled at Holy Angels Anglo Indian Higher Secondary School and then completed a degree in commerce at Stella Maris College, Chennai. She began dating actor Naga Chaitanya in 2010 and the pair were engaged in a ceremony in Hyderabad during January 2017. She got married in Goa as per traditional Hindu customs on 6 October 2017 and then by Christian customs on 7 October 2017.

On the work front, The actress who made her last appearance in Kollywood through Thiagaraja Kumararaja’s Super Deluxe is expected to sign more films in Tamil. “Kaathu Vaakula Rendu Kaadhal” of Vijay Sethupathi and Nayanthara is one of them, motion posted of which was released on the valentines day.

What do you think on the way Samantha handled the fan in temple ??Comment your views below !!

Previous articleVijay’s Father Slams Back At Controversies !!
Next articleTrisha Got Slammed By Producers For This Reason !!

Keerthy Suresh bagged the "Priceless Jewel of South cinema" award in the Wonder Women Awards conducted by Galatta youtube channel. The actress who is...

We have seen marriages getting stopped due to various reasons all these years. But stopping a marriage ceremony which is made of huge money,...

While many female activists are protesting in social media platforms against the inequality between women and men in daily basis, a Tamil nadu based...