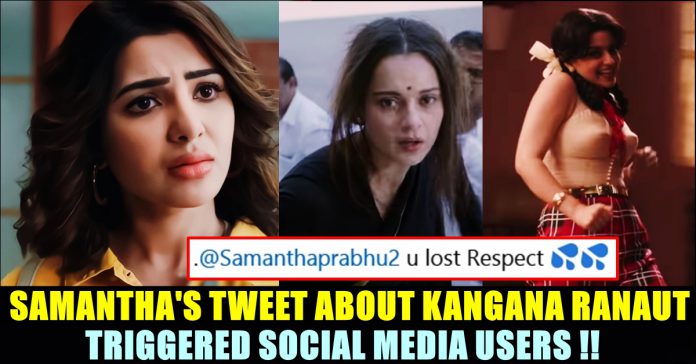 The much awaited trailer of Kangana Ranaut starring “Thalaivi” released on youtube. In the film, the actress played the role of Tamil nadu’s former chief minister J.Jayalalitha. The 3 minute long trailer showed Kangana as Jayalithaa, and her on-screen and off-screen relationship with MG Ramachandran, played by Arvind Swami. It is shown MGR easing her into politics, promising that people will return her love one day.

The trailer also showed the popular episode of 1989 when Jayalithaa was brutally attacked by the DMK members in the state assembly. Kangana could be seen comparing herself to Mahabharat’s Draupadi and promises vengeance. The appearance of former prime minister Indhra Gandhi also takes place in the trailer as Jayalalithaa addresses her in her maiden speech in the Parliament.

Trailer of the A.L Vijay directorial ends with a dialogue of Kangana who says “If you see me as your mother, I will keep you in my heart,” which describes the role of J.Jayalalitha in the history of Tamil nadu politics. Kangana’s performance as Jayalalithaa makes quite an impression among the fans and celebrities.

“Thalaivi Trailer is outstanding Kangana. You are the bravest , most daring and indisputably the most talented actress of our generation Vijay sir goosebumps stuff just goosebumps stuff. Can’t wait to witness this magic in the theatre” wrote actress Samantha in her tweet after watching the trailer.

#ThalaiviTrailer is outstanding 🙌🙌 @KanganaTeam You are the bravest , most daring and indisputably the most talented actress of our generation 🙏🙌#Vijay sir goosebumps stuff just goosebumps stuff 🙏
Can’t wait to witness this magic in the theatre ❤️

However, this tweet from the actress didn’t go well with many of the actress’s followers and the people who personally hate Kangana Ranaut for her public opinions and controversial statements. “pls tell me u were hacked” said a follower on seeing the tweet of Samantha whereas another one said “Time to unfollow you”

pls tell me u were hacked https://t.co/7srPZscICi

sam blink twice if you're being held captive😕 https://t.co/dx4XJWOLvm

The contestants of Bigg Boss show is getting eliminated in weekly basis based on the votes they are getting. The show which has seen...