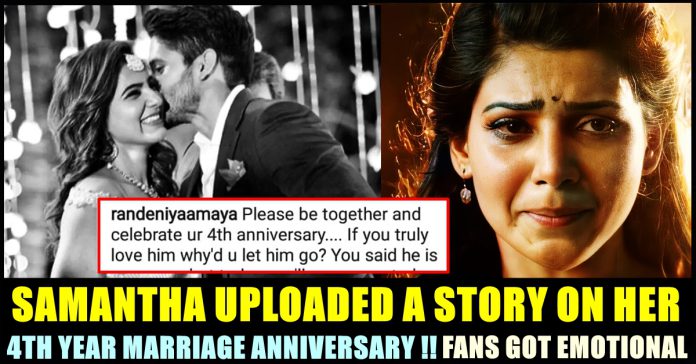 October 7 would have marked the successful 4th anniversary of Samantha and Naga Chaithanya if the duo didn’t announce their separation on 2nd of this month. Despite of making their divorce announcement, both Samantha and Naga Chaithanya didn’t remove the pictures of themselves together from their respective social media accounts. Around 5 AM on this special day of her life, the actress came up with a story in her official Instagram account with fans wishing “Happy Anniversary” by commenting on the old posts of herself in which she could be seen posing with her ex-husband. Posts of Naga Chaithanya are also being flooded with “Anniversary” wishes from “Chay-sam” fans.

Samantha got married to Naga Chaithanya in Goa as per traditional Hindu customs on 6 October 2017 and then by Christian customs on 7 October 2017, and became a member of the Akkineni family. Now, after nearly four years, the couple had officially announced about their seperation. Now, on the day of her 4th marriage anniversary, the actress came up with a post in her official Instagram account.

The shows the actress capturing a picture of herself with her two pet dogs. Without showing her face, Samantha captured the two dogs through her selfie and drew a drew a “heart” to express her love towards them. By uploading the picture, Samantha answered to the millions of fans who are still requesting her to reunite with Naga Chaithanya. The actress clearly indicated that she ended everything with Chay by uploading the pictures of her dogs on the most special day of her marriage life.

Check out the screen shot of the actress’s story which was uploaded around 5 AM on 7th of October :

However, hundreds of her fans who are still hoping for her to join hands with Naga Chaithanya again, has been wishing “Happy anniversary” through the comment section of one of Samantha’s old post in which she could be seen posing with her ex-husband. The post was uploaded on the anniversary day of last year by Samantha with a caption saying “You are my person and I am yours , that whatever door we come to , we will open it together . Happy anniversary husband @chayakkineni ❤️”

Check out the comments that surfaced today :

Instagram posts of Naga Chaithanya are also being flooded with similar comments on this special day of his marriage life.

After TN minister Kadambur Raju said that theatres in Tamil nadu will not have reopen in anytime soon, fans of Tamil cinema are reacting...

Former Indian Spinner Amit Mishra won the hearts of Internet users by sending a random online user Rs. 500 after he asked him to...

We all have come across a girl who named as Indulekha wearing "Burqa" to protest against the law passed by the BJP government. The...