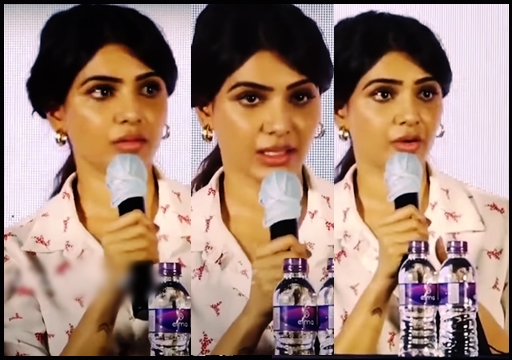 Tamil nadu based Pan Indian actress Samantha opened up about her mental health for the first time after her divorce at the launch of “Psychiatry at your door step” initiative of Roshini Trust and Datla foundation. Ever since Samantha took an important decision about her personal life, she is floating in the spotlight and is facing an unavoidable attention. The actress who kept mum about the issues that she has been facing in her private life, opened for the first time in the event in which she took part as a chief guest.

While speaking at the event, Samantha spoke about her mental health struggles and how people helped her to overcome those. “There should be no inhibitions about seeking help when you are mentally disturbed. In my case, I was able to overcome my mental health issues only with the help of my counselors and friends” Samantha said in the event.

The “Kaththi” actress stressed the point about seeking help from psychiatrists and said that it should be normalised. “Like how we are going to see a doctor if we get hurt physically, we also should seek the help from doctors if we have a broken heart” the actress said. “I think it’s time for us to normalize our lows and asking for help” She added.

“When we are going through a low, friends and family should not just say “calm down, it’s going to be okay” because it’s not. It’s time for friends and family to say “if you need help, ask for help” because people are there to help” Samantha said through her speech.

Previous article“CORONA Helps The Rich To Get Richer & Poor, A Beggar” – Tamil Hero’s Sensational Tweet
Next article“Uncle & Aunty Wouldn’t Be Proud Of You” – Says This Actress To Siddharth !!

A 15 year old video of director Pa. Ranjith pranking anchor Archana is doing rounds now in social media platforms as both of them...