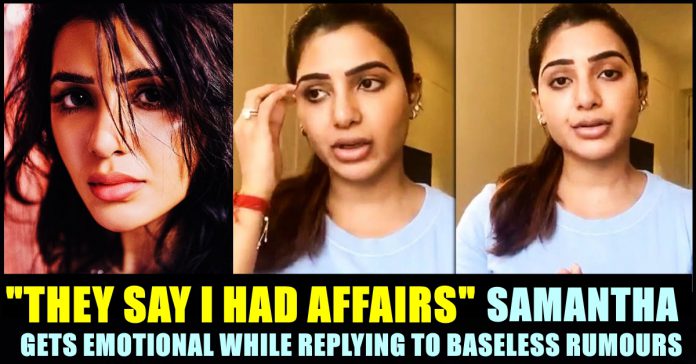 South Indian Actress Samantha came up with a note in her official social media handles, brushing off the rumours and speculations that surfaced against her after her divorce. The actress mentioned some of the rumours that emerged against her and said that she never let them break her. She who said that divorce is itself a painful process, expressed her frustration over the attack that is being made on her regarding her decision on divorce Naga Chaithanya.

Last Saturday, Samantha and Naga Chaithanya announced about their separation from marriage life, citing no exact reason. The duo said that they are going to pursue their own paths. “We are fortunate to have a friendship of over a decade that was the very core of our relationship which we believe will always hold a special bond between us. We request our fans, well wishers and the media to support us during this difficult time and give us the privacy we need to move on. Thanking you for your support” both their social media posts read.

Samantha got married to Naga Chaithanya in Goa as per traditional Hindu customs on 6 October 2017 and then by Christian customs on 7 October 2017, and became a member of the Akkineni family. Now, after nearly four years, the couple had officially announced about their seperation. Now, on the day of her 4th marriage anniversary, the actress came up with a post in her official Instagram account.

“A divorce in itself is an extremely painful process. Let alone allowing me the time to heal. This attack on me personally, has been relentless. But I promise you this, I will never allow this or anything else they say, break me.” she further added in her post. Check out the post of her below :

The post garnered wide reach among the users of Twitter with various hundreds of users morally supporting the 34 year old actress. Check out some of the reactions below :

We are with you. More power to you Queen. 👑

We loved you as Samantha not because you married to someone. It doesn't even matter to us mam you'll be always same to us 🤗🤗

Previous articleFan Tattooed Actress Amritha’s Name In His Hand !! Check How The Actress Reacted
Next articleBollywood’s Top Celebrities Supported Aryan Khan Who Got Arrested In A Drug Case !!

Actress Radika Sarathkumar who is known for her versatile performances in Tamil film industry since very long time, is also known for her Television...