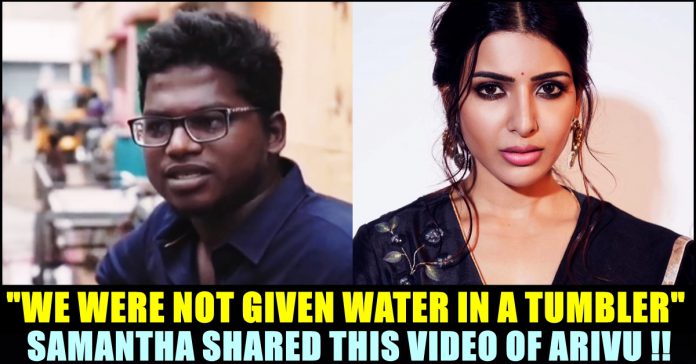 Samantha Shared This Video Of Arivu & Sends An Important Message !!

After singing “Vaathi Raid” in “Master” of Vijay- Lokesh Kanagaraj, Rapper came into the scene of mainstream cinema and started establishing his career as a Rap singer in the Tamil film industry. However, his recently released “Enjoy Enjaami” gained him international acclaim as the independent song he made with singer Dhee is trending in youtube with 126 million plus views. He who comes from the school of Pa. Ranjith, voices out against any form of oppression through his art works and one of the videos in which he talked about the existence of caste oppression in India got shared by actress Samantha Ruth Prabhu who has 16 million followers in Instagram.

In the video, Arivu could be seen talking about how people are still being oppressed in the various part of our country and his intention of discussing about it through art form. In the video, Arivu says that people would ask which street one lives to known about his/her caste and narrates the stories he heard from his grand father.

“If you say that I’m coming from a village, They will ask you in which street you live. It’s asking which caste you belong to. That’s not equality” Arivu says in the video. “I used to listen to the stories of my grandfather” says Arivu and goes on to explain what he said to him. “we were landless, we were not allowed to get into someone’s home through front door. We were not given water in a tumbler.” Arivu’s grandfather said to him according to the video. “These things have been continuing for thousands of years” the singer says.

Arivu explains that he learnt that modern untouchability still exists in the society through reading books. “A son of a manual scavenger is compelled to do manual scavenging.” he says and condemns people who believe that Caste doesn’t exists.

“You will be sitting comfortably and will tell that there is no caste. But your forefathers of forefathers would have been land owners and They would have oppressed so many people. Generations of those people are living on the streets” he said.

“You go a private school or international school, get educated there and say that “I don’t see caste”. It’s ridiculous. So I educated myself and wanted to tell things in an artistic way so that everyone can understand what I am saying” Arivu says in the video. “Art is the most influential way to get into the mind of a person” Arivu believes and says that he always wanted to be an artist to show his pain.

Sharing the video in her official Instagram account, actress Samantha who is considered as one of the leading actresses with most number of fan following, said “Let us be the generation of change . . Respect”

Previous articleMS Dhoni Fined Rs. 12 Lakh After Getting Out For A Silver Duck !!
Next articleIPS Officer’s Tweet About “Karnan” Is Trending !!

Muslim women wearing burqa always been a subject to debates and criticisms. Even A.R Rahman's daughter is no exception it seems as she got...

Kanakuntla Rajitha, a 24 year old woman who belongs to Kundaram Village in Mancherial district of Telangana, died while undergoing treatment in a hospital...