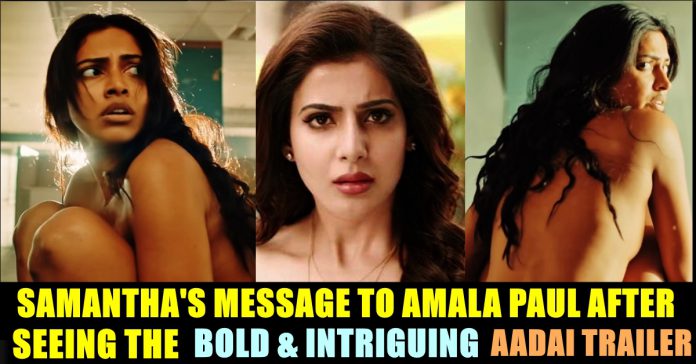 Freedom is what you do with what is done to you. The most-awaited Aadai teaser begins with this quote of philosopher Jean-Paul Sartre, hinting at a survival story of a girl, who fights back to reclaim the freedom snatched away from her.

The trailer shows a mother complaining to police about her daughter’s missing and informs them hesitantly that she was drunk during the last phone call she made. The trailer which is not spilling the beans on revealing the story line of the movie, shows one of the boldest shot in Tamil cinema ever which has Amala Paul waking up nude to the reality after being unconscious for a long time.

On watching this trailer actress Samantha, one of the prominent actress in South India lauded it and said she is curious to watch the film. In her tweet she wrote “Looks amazing @Amala_ams … all the best to you .. curiosity levels high .. looking forward 🤗”

Followed by her “Thalli Pogathey” actress Manjima Mohan also surprised and wrote “This is intense! Looking forward to watching the movie !!”

This is intense! Looking forward to watching the movie !! @Amala_ams 🔥 https://t.co/kHnk5zkKAS

Check how other celebrities reacted to the teaser :

One of the most boldest hard hitting teaser in recent times!! #AadaiTeaser @subbhunaarayan @MrRathna awesome guys 👏🏼 👏🏼 @Amala_ams respect👍🏽👍🏽 https://t.co/WWR3V5jGzL my hearty wishes to the team

Best wishes my dear ones @Amala_ams @thisisoorka for a super success 😀 I’m a fan of Meyaadha Maan and am sure @MrRathna would have rocked this 🙂 https://t.co/V1q4ScSKzJ

The trailer has certainly leveled up the hype created by the first look, and if the film manages to shock and surprise us the same way, Aadai can very well be called, ‘audacious, and artistic.’ as the tag line claims.

What do you think on the trailer ?? Comment your views below !!