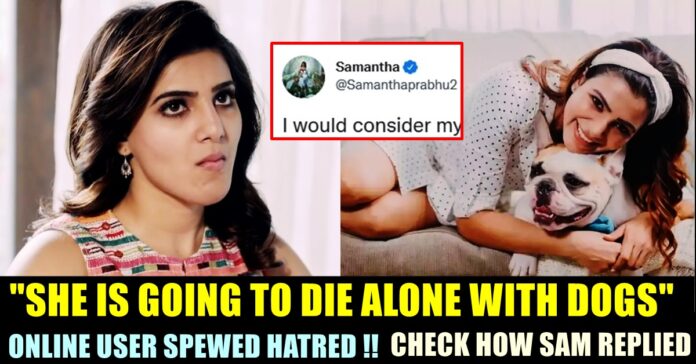 Actresss Samantha Ruth Prabhu who is predominantly appearing in South Indian films, is known for interacting with her online followers every now and then. Her replies to trolls and harsh criticisma from toxic social media users has often made headlines. On Friday, the actress replied to a twitter user who said that she will die alone with her cats and dogs.

Fondly called as “Sam” by the fans, Samantha, apart from uploading pictures from her photoshoots and updating about her upcoming films, would also flex her love for her pet animals. In her Instagram space where she is enjoying 23 million plus followers, the actress, uploaded a picture with her pet dogs in gym and said “Early rising and Loving, Missed this” through her caption.

Apart from this one, Samantha had uploaded a number of adorable pictures with her pet dogs. Reacting to such posts, a toxic twitter user, through his comment said that Samantha will die alone with her pets.

“She gonna end up dying alone with cats and dogs” the follower named Logi commented to spew hatred against the actress, in a way of taking dig about the decision she made recently about her personal life.

Without losing her cool, Samantha calmly replied that she would consider herself as lucky if she dies in that way. “I would consider myself lucky” read Samantha’s reply which is doing rounds among the online users. 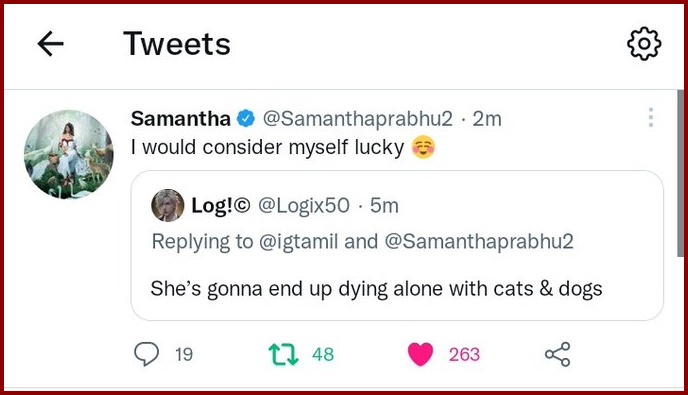 As soon as receiving such reply from the top-tier actress, the online user deleted his tweet. However, screenshot of his comment is doing rounds among the fans of the actress.

She is not alone she has her mother and father and all family members and the most important point is
She has a great person in her side that’s “God ” , The most favorite child of god

Hi @Samanthaprabhu2 good reply but no need to reply to such tweets not necessary. We all will be there till your old age so you will not feel lonely. Have a fabulous Friday and weekend.

I would like to say 2012 Sam and 2022 Sam is different a complete matured girl she is right now @Samanthaprabhu2
She knows how to react and what to say 💖 always prefer positive upon negativity ,won hearts

She who was last seen in “Kaathu Vaakula Rendu Kaadhal” of Vignesh Shivan, is expected to be seen in “Shaakuntalam”, a mythological drama film, written and directed by Gunasekhar and produced by Neelima Guna and Dil Raju. She recently made her digital debut with the second season of the popular Hindi series The Family Man. “Kushi” with Vijay Devarakonda is one of her upcoming projects as well. The actress who is pretty much active in social media platforms, enjoys 9.6 million and 23 million followers in Twitter and Instagram respectively.

On the personal front, the actress announced about her divorce with Naga Chaithanya last year and has been concentrating on her work. The couple, while announcing their divorce, sought privacy but the actress has been going through a lot of toxicity in social media platforms ever since making the important decision of her life.

Previous articleRCB Getting Trolled From Every Direction Of The Internet!!
Next article“Next Saala Cup Namde” – Vijay Film Actress Got Trolled For Her Tweet

It is quite fascinating that even after IPL XII has reached its last week before the knockouts no team has yet been (at least,...

Zomato founder Deepinder Goyal's take on the recent controversy that took place after a customer named Vikash got offended by the messages he received...