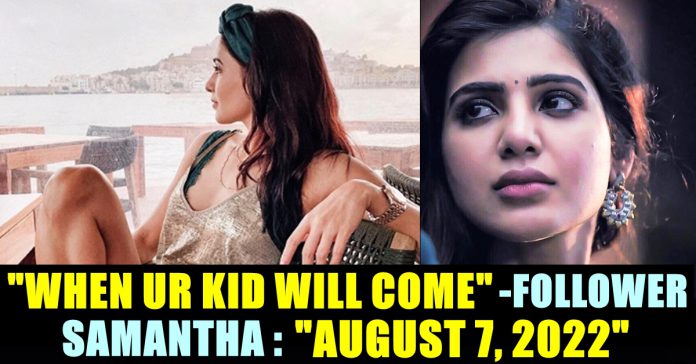 Online fans are always desperate in interacting with their favourite celebrities. Samantha Ruth Prabhu is one of the many actresses who is very much active in social media platforms. She is also being one of the prominent celebrities who posts their daily routines through Instagram stories and posts. The actress is known for hitting back at the trolls occasionally to make them understand her stand in certain things.

The more Samantha posts her pictures and videos, the more people, especially young girls, she gets to inspire. But there are cases where things could turn the other way around due to some negative people who intends to ruin her posts and stories with their vicious comments and irrelevant questions. Samantha caught herself in lot of such incidents and now gave it back to an online user as well. Yesterday, the actress conducted a question and answer session with her followers as her flight got delayed.

The actress who enjoys more than 80 lakh followers in Instagram, kept receiving many questions and she answered to them through video interaction. Meanwhile, one of a user asked the actress when she is going to get baby.

Samantha, a Tamilnadu born actress who married to Telugu super star Naga Chaithanya on October, 2017, got irritated by the ridiculous question of the Instagram user. In a way of replying to him/her, Samantha in her video said, “For all those of you who are really interested in the functioning of my body, I’m gonna tell you, I ‘m gonna have a baby on the 7th of August at 7 a.m, twenty twenty two (2022), that’s it”

Here’s the video of the actress replying to one of her follower :

As we all know, we couldn’t decide the time and date of a baby’s birth. Getting frustrated by such questions, Samantha who thought of shattering them once and for all, gave them a date, in a way of trolling them. Though many of the netizens are supporting the “Kaththi” actress for her sharp reply, few felt that the actress could have avoided the question.

Samantha is basically born and brought up in Chennai, Pallavaram. Despite her mixed regional background, she has cited herself as a Tamilian. Samantha was schooled at Holy Angels Anglo Indian Higher Secondary School and then completed a degree in commerce at Stella Maris College, Chennai.

The actress who made her last appearance in Kollywood through Thiagaraja Kumararaja’s Super Deluxe is expected to sign more films in Tamil. The actress is all set to appear as “Jaanu” in “96” Telugu remake which is going to be directed by Prem Kumar who made the original version in Tamil.

What do you think on this reply of Samantha ?? Comment your views below !!

Previous articleGuy Posted Negative Comment On BIGIL Anitha’s Picture !! Check What She Did !!
Next articleVadivelu Made The Entire Stadium To Erupt In Laughter !! WATCH VIDEO !!