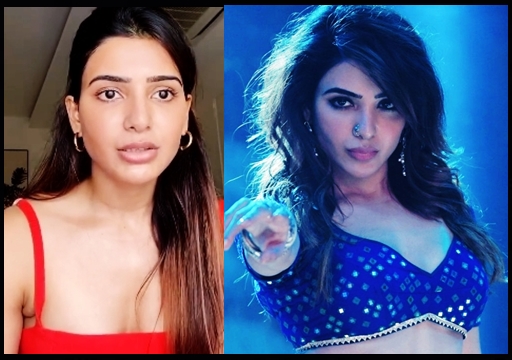 Actress Samantha has been going through a lot of negativity in her life ever since making a decision about her marriage life with Telugu actor Naga Chaithanya. The Tamil nadu based actress has been brushing off the toxicities she has been facing every now and then through her interviews and press releases. Now, the actress who is busy signing movies and basking in the success of her performance in “Oo antava” song, reacted to a negative comment of an online user that was made on her separation with Naga Chaithanya.

The social media user termed the actress as a “ruined second hand item” and went on to make a baseless claim on the actress getting Rs. 50 crores of tax free money from her former husband. Replying to this most baseless, barbaric comment, the actress mentioned the online user’s name and wished for the God to bless his soul. The tweet is going viral among the users of micro blogging social media site with many boosting strength to the actress, suggesting her to stay positive.

Despite of the decision made by the actress, many users of social media kept requesting the actress to rethink about the same through the comment section of her social media posts. Few venomous online users started spreading baseless rumours about her as well. To all those who accused Samantha of having affairs, not wanting children, being an opportunist and of aborting a child, the actress came up with a note to shut them all down. The actress mentioned some of the rumours that emerged against her and said that she never let them break her. She who said that divorce is itself a painful process, expressed her frustration over the attack that is being made on her regarding her decision.

Now, after a couple of months, while the actress is busy concentrating on her acting career, an online user made an insensitive comment against her. Reacting to a tweet which was made on the male version of Samantha recent sensation “Oo Antava” song, the user named “Kamarali Dukandar”, said “Samantha is a divorced ruined second hand item who has 50 crores tax free money robbed from a gentleman!” through his comment.

@Samanthaprabhu2 is a divorced ruined second hand item who has 50 crores tax free money robbed from a gentleman!

As he tagged Samantha herself in his toxic comment, it notified the actress who came up with a reply and exposed the abusive user’s identity. “Kamarali Dukandar God bless your soul” said Samantha through her reply who could have crumbled inside seeing the heartless comment.

It is hightime for online mongers to realize that the shade they casually throw on others could cause pain that last for a long time. Many of the actress’s fans asked her to ignore negativity and to stay strong. Check out some of the reactions Samantha’s reply garnered :

Stay strong Girl…!!! Please god, give her the strength she needs.🙏🏻 pic.twitter.com/vo0SZEa3kL

We fans stay for u queen u😻 pic.twitter.com/Px4wFCqM82

More power to you Sam..
please stop spreading hate and negetivity towards her please https://t.co/A0zDDZIVOO

Previous articleSS Rajamouli Facing The Heat Of Pawan Kalyan Fans Ahead Of RRR Release !! CHECK WHY
Next articleAnushka Sharma’s Important Message To Fans !!

Veteran actress Rekha became the first participant to get eliminated from the season four of Bigg Boss show which is being hosted by Ulaganayagan...