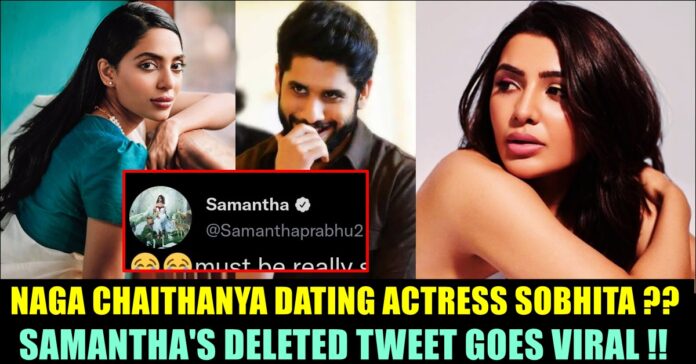 Samantha reacted to a toxic comment of an online user that surfaced regarding a dating rumour of Naga Chaithanya and deleted her reply tweet immediately. However, screenshot of the actress’s reply is trending in the social media platforms with many media portals carrying it as a news report. Through her reply, Samantha clearly indicated that she doesn’t give a damn about Chay’s relationship after their divorce.

On Monday, many leading news portals including The Times of India, updated a report saying that Telugu actor Naga Chaithanya is dating Sobhita Dhulipala of “Made in Heaven” fame. According to a report of Pinkvilla, a duo were spotted together in Naga Chaithanya’s under-construction home that is located in Jubilee Hills, Hyderabad. 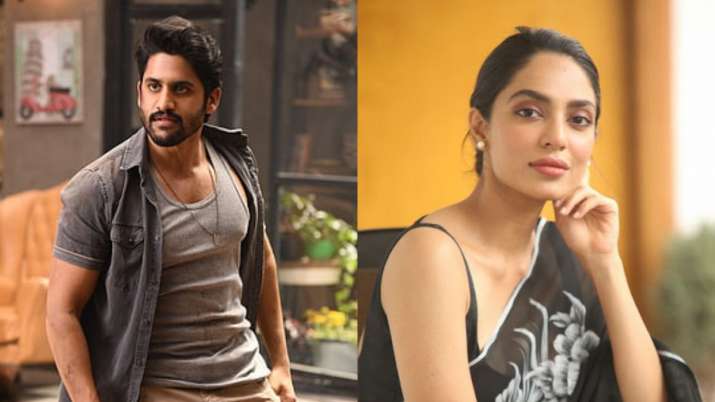 Reacting to the rumour, a twitter user called Samantha a “prostitute” and implied that Naga Chaithanya shouldn’t loathe the rest of his life after his divorce with Samantha. Immediately responding to the abuse, Samantha added two laughing emojis and said “Must be really scared” in a way of denoting that she doesn’t care either about the rumours about Chay or about the online user abusing her inappropriately.

Here’s the screenshot of the now-deleted tweets : 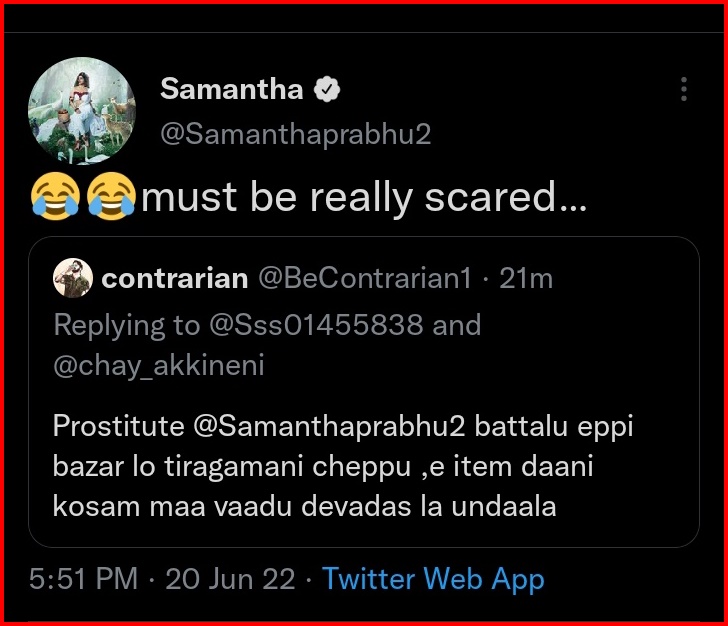 Ever since divorcing Teluguactor Naga Chaithanya, Samantha has been facing hatred in social media. On 1st of October, Samantha and Naga Chaithanya announced about their separation from marriage life, citing no exact reason. The duo said that they are going to pursue their own paths. “We are fortunate to have a friendship of over a decade that was the very core of our relationship which we believe will always hold a special bond between us. We request our fans, well wishers and the media to support us during this difficult time and give us the privacy we need to move on. Thanking you for your support” both their social media posts read.

“A divorce in itself is an extremely painful process. Let alone allowing me the time to heal. This attack on me personally, has been relentless. But I promise you this, I will never allow this or anything else they say, break me.” she further added in her post. Check out the post of her below :

Previous article“I Need 25 Million Likes” – Samantha’s Video Irked Her Own Fans !!
Next articleActor Nataraj Got Trolled For His Tweet About Joining Army !!