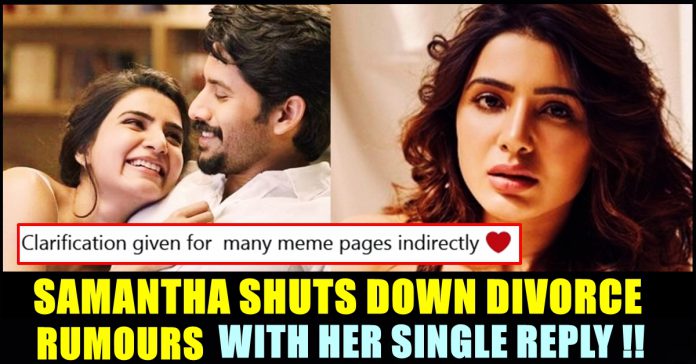 In a way of putting full stop to the divorce rumours that are circulating in Internet platform for the past few weeks, actress Samantha re-uploaded a tweet calling actor Nagarjuna as “Mama” while replying to one of his tweets. The way she deleted her previous tweet and re-uploaded it only to call Nagarjuna as “Mama” gave sigh of relief to her ardent fans which is evident through the reactions that are flooding in the comment section of her post.

For past several weeks, a rumour on Samantha getting divorced from her husband and Telugu actor Naga Chaithanya is doing rounds in the social media platforms. It all started when the actress changed her social media handle names from “Samantha Akkineni” to “S”. Media started creating theories saying that the actress is demanding Rs. 250 crore as alimony for the divorce. The actress who blasted at a reporter who asked about the same to her when she visited Thirumala temple, shuts down such reporters once and for all through her online activity it seems.

On 20th of September, Telugu Super star Nagarjuna came up with a video remembering his father whom he refers as his hero and inspiration. Check out his tweet below :

Initially, Samantha replied to the tweet writing “This is so beautiful” and tagged the official twitter handle of her father in law with a series of emojis. However, she deleted the tweet immediately and came up with a new one. Here’s the screen shot of the deleted now :

In her new tweet, Samantha called Nagarjuna as “Mama” which means Father-in-law in the region languages of South India. By uploading the tweet, the actress indirectly denoted that things haven’t changed a bit between herself and Nagarjuna’s son Naga Chaithanya. Here’s her new tweet :

Check out some of the reactions the actress’s online activity garnered :

Finally Good to see Sam Opening Up and closing topic

Clarification given for many meme pages indirectly ❤️

During the wee hours of Saturday, Samantha flew to Tirupathi and offered special prayers to Lord Venkateshwara at the VIP hours. While walking in the temple premises after praying, the actress got surrounded by local journalists. One of them reportedly asked her to comment on the ongoing rumours about her marriage life.

The “Super Deluxe” actress who got visibly frustrated, immediately blasted at him, asking “Guddikki Vachi . . Bhudhdhi Unthaa ??” which is translated as “I am in a temple, do you have sense ?”. The video is going viral in the social media platforms with various kind reactions flooding from her fans and others.

Previous articleTIK TOK Abhirami’s Brother Prasanna Ended His Own Life After Facing Rejection !!
Next articleMemes & Trolls On Krunal Pandya Goes Out Of Hand !!

Dhanush Reacted To The First Look Of “Jailer” !! Check How Fans Replied

The most awaited first look of Superstar Rajinikanth's upcoming film "Jailer" released with much expectations from fans. Along with the fans and followers of...