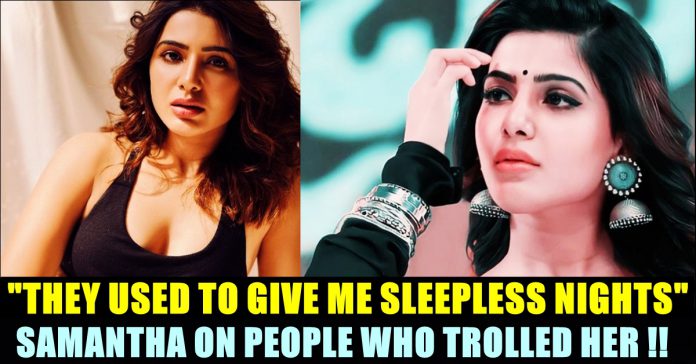 Meanwhile, Samantha, before leaving to the shotting of “Kaathu Vaakula Rendu Kaathal”, conducted a question and answer session with her followers and answered to some of the personal and professional questions. A fan asked how she is handling the social media media trolls and the actress replied saying that she started at them and added that it proves her growth as a human being. She also revealed that trolls gave her sleepless nights in the past.

Many cinema celebrities in India are active and every one of them are facing both love and hatred in social media platforms such as Facebook, Instagram and Twitter etc. Even most loved people such as Rajinikanth, Kamal Haasan and Amitabh Bhachchan are facing severe criticisms in social media platforms. Arguably female celebrities are the ones who are becoming the victims of cyber bullying often as we have witnessed many people abusing them for their clothes and for the poses they strike.

Samantha Ruth Prabhu is one of the many actresses who is very much active in social media platforms. She is currently enjoying 1 crore plus followers in Instagram and has uploaded 1104 posts so far. She is also being one of the prominent celebrities who posts their daily routines through Instagram stories and posts. The actress is known for hitting back at the trolls occasionally to make them understand her stand in certain things.

During a recent question and answer session she conducted, a fan asked samantha how she is handling the trolls in social media. Answering to the fan, Samantha said that they don’t affect her any more like they used to in the past. She who said that trolls gave her sleepless nights, also added that she is laughing at them nowadays and added that it shows how much she has grown as a person.

“Strangely, they don’t affect me anymore, like they used to. They used to give me sleepless nights. Now, I laugh actually. I guess that’s shows how much I have grown as a person” Samantha answered.

#SamanthaAkkineni on how she handles social media trolls . .

Earlier, a number of people in social media behaved so mean to the actress and she reacted to them as well. In 2019, to a guy who said that growing a pet doesn’t make her a mother, Samantha replied “Oh woww because you know me so well .. I somehow forgot the part where we grew up together and I told you about the kind of mother I was planning on being.”

Oh woww because you know me so well .. I somehow forgot the part where we grew up together and I told you about the kind of mother I was planning on being . https://t.co/BLix6iAYsJ

In 2018, when people advised her to behave married on seeing her posts in Instagram, the actress showed them her middle finger to shut them once and for all.

Here’s the Instagram stories she posted at that time :

Here’s how she replied to a follower in 2019. He/She asked her when she is going to give birth to a baby.

Tamil actress Kasthuri who is pretty much vocal about her opinions about sports, politics and cinema through her official twitter handle, on Monday, commented...

On seeing, the frontline workers of Kasturba Gandhi hospital suffering without salaries for past three months , actress and former Bigg Boss contestant Raiza...