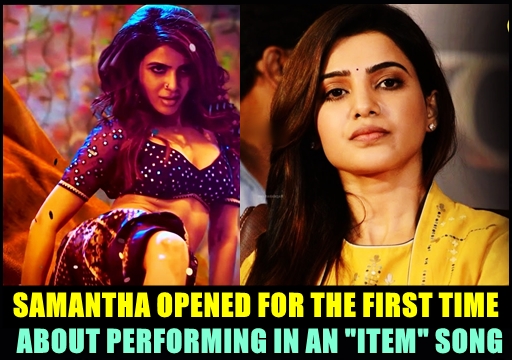 Samantha Opened About Performing In An “Item Song” For The First Time !!

Actress Samantha Ruth Prabhu who became the talk of the down after performing in an item number for Allu Arjun’s “Pushpa”, reacted for the first time through her Instagram timeline after the song became a huge success among fans. Expressing her gratitude to her fans, Samantha said that she played all kind of roles in her career which spans more than 10 years but “being sexy” demanded “next level” hard work from her.

“This is an @alluarjunonline appreciation post !! A performance that just keeps you hooked .. every second was 🔥🔥 I am always always inspired when an actor is just so good that it is impossible to look away .. @alluarjunonline was that for me in #Pushpa .. from the accent to the one side drooping shoulder and that god damn SWAG …. 🙏🙏🙏 Phew .. absolutely stunning .. truly truly inspired ☺️” Samantha said in a post that was uploaded on Sunday.

Te first ever item song of the actress courted controversy even before the release of its full video. A Men’s association filed a lawsuit against the makers for the lyrics which claim that all men are lustful. Reacting to the controversy, Allu Arjun said “It’s true only” in front of the press.

The film released on 17th of December and many fans were thrilled to see samantha’s special appearance in the film. In the videos that were shared by Samantha, we can see the fans dancing in front of the screen in multiple theatres. Reacting to the huge reception, Samantha uploaded a special post in her official Instagram account saying that she played all kind of roles but “being sexy” is “next level hard work”.

Watch the lyrical video of the song below :

“I played good , i played bad, i was funny , i was serious, i was a chat show host too.. i work really hard to excel at everything that I take up …but being sexy is next level hard work….phew #ooantavaooooantava Thankyou for the love 🤗♥️”  post of the actress read.