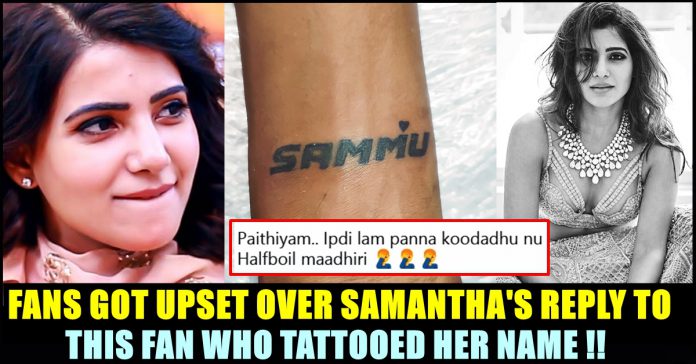 South Indian actress Samantha Ruth Prabhu started receiving flak from her own fans after replying to one of them who tattooed her name in his wrist. The actress replied to him by adding the emojis of a pleading face and some of the users of the micro blogging social media site believed that she is encouraging him. Meanwhile, many could be seen trying to get the attention of the actress by asking her to “Reply”.

She is also expected to be seen in “Shaakuntalam”, a mythological drama film, written and directed by Gunasekhar and produced by Neelima Guna and Dil Raju. She recently made her digital debut with the second season of the popular Hindi series The Family Man. The actress who is pretty much active in social media platforms, enjoys 8.9 million and 18 million followers in Twitter and Instagram respectively.

In twitter, one of her ardent fans, came up with a series of pictures which showed himself getting tattooed “Sammu” in his wrist. “Finally, Here it is…! Sammu My First Love & My Last Love #fanboytattoo. My Love for you is infinity Infinity @Samanthaprabhu2 My love on you is Permanent. And this tattoo will stay Permanent” he said in his tweet.

Finally, Here it is…! #Sammu My First Love & My Last Love 🙈💕 #fanboytattoo
My Love for you is infinity ♾️❤️ @Samanthaprabhu2 😘#SamanthaAkkineni
My love on you is Permanent
And this tattoo will be stay Permanent pic.twitter.com/k55SVlwB2q

Samantha, reacted to this tweet by adding “Pleading emojis”.

On seeing this reply, many criticized actress, schooling her not to encourage such fans. Check out some of the reactions below :

Man this is so dumb. https://t.co/YWELdvm0O6

why are you even encouraging??

Previous articleBigg Boss Participation Of These Two Celebrities Confirmed 100 %
Next articleList Of 8 Movies That Showed Women As ‘Rehabilitation Centre’!!

“Don’t Go To India, Its Not Safe” Said Swiss Girl Player’s Parents & Restricted Her From Squash Championship !! This Hurts !!

The Switzerland team competing in the World Junior Squash Championships has arrived in Chennai without their top player Ambre Allinckx, 16, after her family...