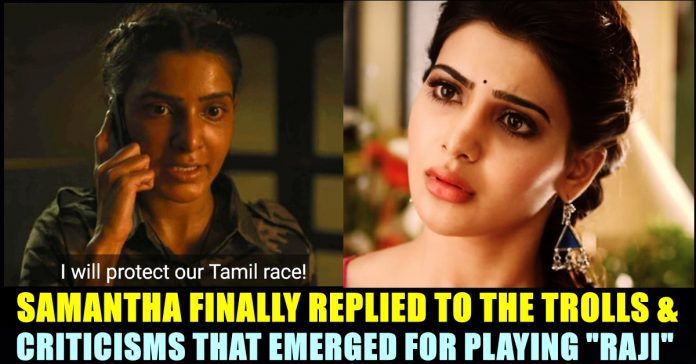 Day after the release of Family Man 2 web series, actress Samantha who got criticized by a number of social media users for taking up a role that allegedly portrayed a girl who belong to Tamil Eelam as an extremist, came up with an official press statement. Samantha says that she was aware of the sensitivity and balance that was required to do the role Raji. She who was reading the reviews since the release, said that the character “Raji” will always be special to her.

The actress said that the creative team shared documentaries that showed the struggles faced by Tamil people in the Eelam war. “When I watched those documentaries, I was aghast and shocked by the troubles and unspeakable grief that the Tamils of Eelam went through over an extended period of time.” she said in her statement and went on to add that the documentaries had only a few thousand views.

“That is when it dawned on me how the world just looked away when tens of thousands people of Eelam lost their lives. And, lakhs more lost their livelihood and their homes. Countless many continue to live in far away lands with the wounds of the civil strife still fresh in their hearts and minds.” her post read.

Samantha further said that the role “Raji” she played is a tribute to the people who died because of an unequal war and to those who continue to live in the painful memory of the war. “I was particular about Raji’s portrayal being balanced, nuanced, and sensitive. I want Raji’s story to be a stark, much-needed reminder for us, more than ever before, to come together as humans to fight hate, oppression, and greed. If we fail to do so, countless more will be denied their identity, liberty, and their right to self-determination.” she said.

This post from her received accolades from her friends and fans. A day before the release of the series, a hashtag saying “Shame on you Samantha” trended in the micro blogging social media site. As a result, a hashtag to support the Tamil nadu based South Indian actress is also trending. Many of her fans were trending “We Support Samantha” hashtag with posts defending the actress for playing the role in the web series.

It all started when the trailer of the series released in youtube. Throughout the trailer of the “Family man 2”, we could see Samantha wearing the uniform of the Liberation Tigers of Tamil Eelam (LTTE). The dialogues also suggested that there is a hostage situation in Chennai. It has been reported that most part of the website is taking place in Chennai. LTTE also known as Tamil tigers is an organisation that attempted to establish an independent state for Tamils named “Eelam” in Sri lanka.

Comment your views on this official statement from the Chennai based actress !!

Vijay Fans Can’t Keep Calm After Seeing This Tattoo Of A KKR Player !!

Fans of actor Vijay couldn't keep calm after seeing a tattoo printed on the arms of mystery spinner Varun Chakravarty who is playing for...

In the press meet, Rajinikanth firmly said that he couldn't apologize to anyone for his speech in the 50th anniversary function of Thuglak magazine....

This Popular Hero Tried For A Role In Chennai 28 ??

Director Venkat Prabhu thanked producer of his first film singer Charan on Sunday as the day marked the 13 years of his debut film,...