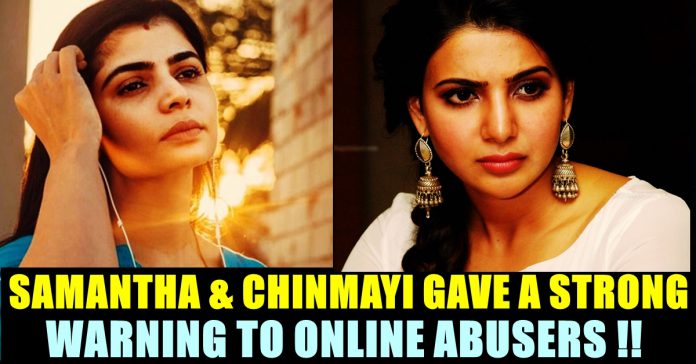 Celebrities from all over the world are subject to online trolling in a daily basis. Social media is a place where almost every individual would seek attention from others. In this digital era we could hardly witness anyone who does not have a Facebook or Instagram account. As smart phones and Internet data became cheap in India since the entry of Jio, the number of people using social media accounts in the country reached sky high.

Many cinema celebrities in India are active and every one of them are facing both love and hatred in social media platforms such as Facebook, Instagram and Twitter. Even most loved people such as Rajinikanth, Kamal Haasan and Amitabh Bhachchan are facing severe criticisms in social media platforms. Arguably female celebrities are ones who are becoming the victims of cyber bullying often as we have witnessed many people abusing them for their clothes and for the poses they strike.

Police even asked women not to hesitate in reporting against those who are making obscene comments in order to make them uncomfortable in social media. As soon as the news surfaced Singer and Me Too activist Chinmayi shared it in her official Instagram account with a caption saying “Now to report every meme maker that says lanja and ninja and she rejected a film because of no liplock. If a few of these men land in jail, they’ll learn a lesson :)”

This news even made actress Samantha happy. She shared the news in her Instagram story saying that it made her day. Check out the screenshot of her story here :

Samantha is someone who often faces unnecessary comments and trolls from her Instagram followers. The actress is known for hitting back at the trolls occasionally to make them understand her stand in certain things. Recently she slammed one of her followers who questioned about her pregnancy. Samantha Replied To Those Who Questioned About Her Pregnancy !!

This news regarding the cyber bullying even made actress Megha Akash to share it in her Instagram account. The actress who made her debut through “Petta” has acted along with Simbu and Danush so far.

Here’s the story she shared :

It is notable that Police have arrested several people who made derogatory comments in social media regarding the rape victims Priyanka Reddy and Disha. What do you think on this move made by the government ?? Comment your views below !!

Tamil nadu government has agreed for 100 % occupancy in theatres ahead of actor Vijay's Master and Silambarasan's Eashwaran release. Responding to the request...