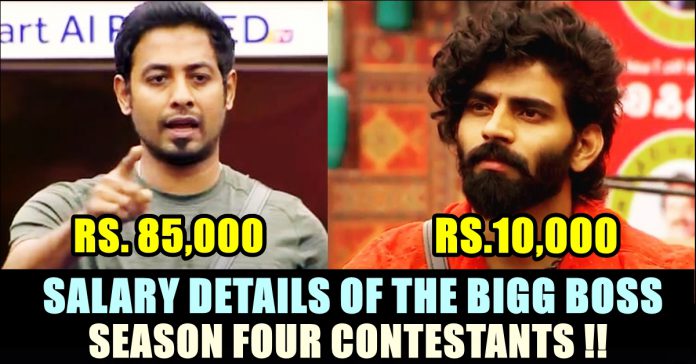 Soma shekar, Ramya Pandiyan, Gabriella Charlton, Rio Raj, Balaji Murugadoss and Aari Arjunan managed to enter the finals. While Gabriella Charlton left the finals midway by receiving Rs. 5 lakh cash money offered by Bigg Boss, Rio became the second runner up. Apart from the winning prize, it is very well known that the celebrities who took part in the show were being paid in daily basis. Now, a report of Vikatan surfaced updating about the salary details of the contestants who took part in the show.

The report also said that Rekha Harris, veteran actress who paired with Kamal Haasan, Sathyaraj and many prominent actors of Tamil film industry, is going to receive Rs. 1 Lakh per day. Vikatan further updated that Sanam shetty was also committed to take part in Bigg Boss show for Rs. 1 Lakh per day.

Salary of Playback Singer, Dubbing Artist and Radio Jockey Suchithra who entered the house as a wild card contestant and stayed for three long weeks is Rs. 70,000 per day, according to Vikatan. Model Samyuktha’s per day salary is Rs. 40,000 and she got evicted on the 56th day of the show whereas stand up comedienne Nisha’s salary is also the same and her eviction came came on 70th day. The report suggested that news reader Anitha Sampath’s per day salary is Rs.40,000 as well.

Shivani Narayanan, TV actress and Instagram model got committed to Bigg Boss show for Rs.75,000 per day and she is the last contestant to get evicted before the final week. Actress Ramya pandiyan who gained widespread fame after the pictures of her terrace photoshoot went viral in Instagram, accepted to receive Rs.75,000 per day for her stay inside the house, according to Vikatan.

Jithan Ramesh, popular Kollywood actor who acted in films such as “Jithan”, “Osthi” is the second highest paid male celebrity inside the house. He reportedly committed for Rs.60,000 for his per day stay inside the Bigg Boss house. He got evicted on the 69th day after receiving number of votes from the audience. Salary of Gabriella Charlton who left the house with Rs. 5 lakh cash prize is Rs. 70, 000 per day, the report said.

Singer Vel murugan is going to receive Rs.50,000 for his per day stay inside the house and it is reported that actor and TV host Rio who received the Entertainer of the season award, got committed for Rs.35,000 per day. Salary of singer Aajeedh who gained fame through Vijay TV”s Super singer show is Rs. 15,000 per day. Balaji Murugadoss, body builder, model and the runner up of the Kamal Haasan hosting show, got committed to the show for Rs.10,000 per day, according to Vikatan He stayed all the 105 days and received “Game changer” of the season award.

Salary amount of Suresh Chakravarthy and one of the finalists Soma shekar are also Rs. 10,000, says the report. As the season came to an end, there were no reports on Kamal Haasan hosting the season 5 yet. However, it has been reported that Vijay TV is going to host the show till season 10.

BBC World Posted About Our Very Own Neasamani !! You Must See These Reactions !!

Nesamani has became a world icon. Yes, in one of his own movies Vadivelu would talk about becoming Obama in overnight. Now the same...