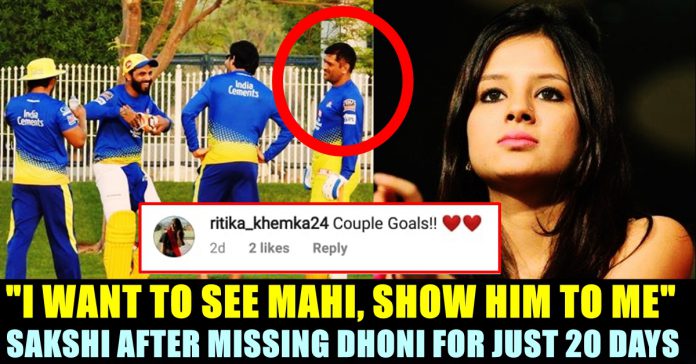 Skype calls and video chats might work but nothing would match the feeling of the warmth of our loved ones. Sakshi Dhoni, wife of former Indian cricketer and current captain of team Chennai Super Kings, feeling the same it seems as her husband is in UAE to participate in the upcoming IPL tournament which is going to start in 4 days.

Fan who could have witnessed MS Dhoni at Chepauk stadium rolling his sleeves up to hit some mammoth sixes, are forced to wait till 19th of September due to the COVID 19 outbreak. The cricketer, with his team, has reached UAE weeks ago and is currently involved in practice. As the tournament is yet to start, Sakshi has already started missing her husband it seems.

Times when you crave attention from #mrsweetie ! Video games vs Wife ( Disclamer : close friends of ours will understand this pik )

The way Sakshi expressed her emotions towards her husband got captured by the fans without her knowledge. Russell Radhakrishnan, manager of Chennai Super Kings team has been uploading videos of what’s happening in the yellow camp in his Instagram account since the start of the practice session. Through his videos, he helps fans to witness some of the interesting incidents that are taking place in the CSK camp which they wouldn’t get to see anywhere else. Russ is the one who captures the videos that are being uploaded in the official social media handles of Chennai Super Kings.

All you've got to do is watch this little video till the end and keep looping it. 🦁💛 #WhistlePodu #YelloveGame @mahi7781 @mvj8 @russcsk

Recently, Russ conducted a live in Instagram to make fans happy. Among the many fans who commented on the live session, Sakshi Dhoni made a series of comments pleading Russ to show a glimpse of Dhoni to see him. “Russ show me Mahi, Russsss” Sakshi commented on the post. After Russ showed him in his video, Sakshi who posted shy emojis, said “Spotted him, Thank you Russ, Thanks n all the best guys #whistlepodu”

Check out the screenshots of her comments below :

These comments won the Internet as fans started seeing her love towards Dhoni as “Relationship Goals”. Check out the screenshot of some of the comments :

Previous articleInsensitive Comments That Got Surfaced In This Educational Video Irked Internet !!
Next articleLeading Music Director Thrashed Flipkart, Called Them “Cheat” !! Check Why