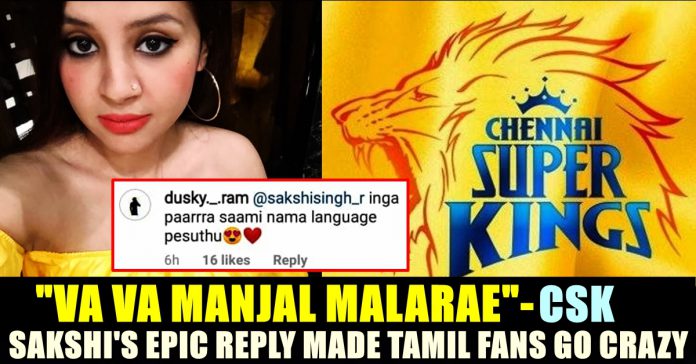 Fan who could have witnessed MS Dhoni at Chepauk stadium rolling his sleeves up to hit some mammoth sixes, managing to witness only a glimpse of him through his wife’s Instagram posts due to Corona outbreak. The bond between Chennai cricket fans and former Indian captain Dhoni is stronger than any other player’s bonding with his IPL playing team fans. While returning to the team after two years of suspension, the man who is known for hiding his emotions almost cried. “It was a very emotional moment…since I have started playing T20 cricket represented the Indian cricket team, Jharkhand team in few tournaments and CSK for eight years, so it was an emotional moment not to see myself in yellow,” Dhoni said at that moment. Not only Dhoni, even his entire family is attached with the team and its fans.

Lately, Sakshi Dhoni who is pretty much active in Instagram, posted a picture of herself wearing yellow attire, the colour of team’s jersey.

She who enjoys 39 lakh followers in Instagram, received 3 lakh likes so far and enormous number of loveable comments from her followers. Meanwhile, the official Instagram account of Chennai Super Kings which is known for its word play and witty replies, posted a Tamil song lyrics to describe her picture.

“Vaa Vaa Manjal Malarey 🎶💛” read the comment of Chennai Super kings which is from the 1989 film “Rajathi Raja”. The song was composed by Legendary musician Ilayaraja. Superstar Rajinikanth and Radha were the duo starred in it. The comment of the CSK admin received loads of love from the fans of CSK.

While everyone thought that Sakshi couldn’t have understood what CSK wrote, the Dehradun girl came up with an epic reply which no one didn’t see coming. “Ticket-u Thaa Thaa Konjum Kiliye” she wrote as a reply changing the original lyric “Ondru Thaa Thaa Konjum Kiliye”. Well, we have to assume that she is asking for the flight ticket to fly UAE with her husband for the upcoming IPL season which is going to take place next month.

This comment from Sakshi is trending among the Tamil cricket fans who got excited on seeing a north Indian girl uttering a Tamil song that got released in the year 1989. Check out some of their reactions :

MS Dhoni and Sakshi, his schoolmate in DAV Jawahar Vidya Mandir, Shyamali, married in Dehradun on July 4 in 2010. At the time of their marriage, she was studying hotel management and was working as a trainee at the Taj Bengal, Kolkata. Dhoni became a father on 6 February 2015 to a baby girl named Ziva. The cricketer who was in Australia for 2015 world cup during Ziva’s birth , refused to travel back to India and said “I am on national duty, other things can wait”.

Comment your views on this epic reply of Sakshi !!