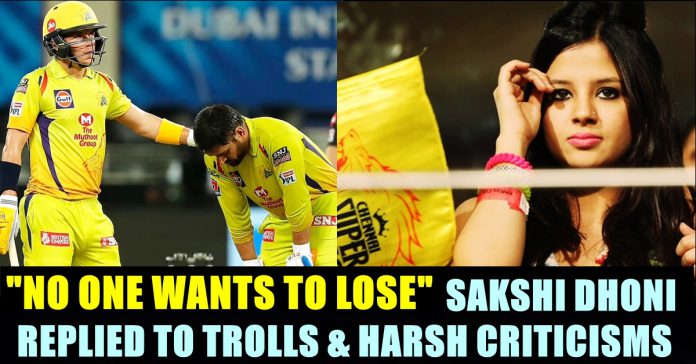 As Chennai Super Kings got officially out of the playoffs race for the first time in IPL history, Sakshi singh, wife of captain Mahendra Singh Dhoni came up with a long emotional post to console fans who are agitated due to the poor results. Through her post, she tried to make fans understand that “it’s just a game” and it has nothing beyond to feel sad about it.

Despite of winning the second league against RCB comfortably, chances of CSK getting into play offs faded away after Rajasthan Royals thrashed the quality bowling order of Mumbai Indians in their second league match. The CSK team which is known for its huge fanbase, disappointed them with the poor performance in this season. However, fans convinced themselves by believing that their favourite team will bounce back next year.

Meanwhile, Sakshi Dhoni, wife of former Indian captain came up with a long social media post to console fans. In the post, which had yellow background, Sakshi said that “It’s just a game in which one win some and lose some”

“Years gone by are witness to many enthralling victories and a few agonising defeats. Celebrating one and being heartbroken by the other. Some reasonable response others not so,” she wrote in her post.

“Some win, some lose and others miss…it’s just a game. Many preachers and varied reactions. Allow emotions not to beat the very essence of sportsmanship. it’s just a game. No one wants to lose, but not all can be winners. When struck down, stunned, the walk back from the field seems long. jubilant sounds and sighs add to the pain, inner strength takes control. It’s all just a game. ” she said.

“You are winners then, you are winners now. True warriors are born to fight as they will be Super kings in our hearts and in our minds” she added.

Sakshi has always been an ardent supporter of team CSK. Prior the tournament, in one of an Instagram post of Sakshi in which she was wearing a yellow outfit, Chennai Super Kings wrote “Vaa Vaa Manjal Malarey ” referring to a song of 1989 film “Rajathi Raja”.

She probably could have asked for the flight ticket to fly UAE with her husband for the IPL season. However, she didn’t reach the place and the team has only two games left.

This Actor Thrashed Modi As “Insensitive Leader” For Spending 3000 Cr. For A Statue !! Watch Video !!

Prime Minister Narendra Modi today unveiled the Statue of Unity, which at 182 metres is the tallest in the world, as a tribute to...

In the last 10 days, actress Meera Chopra who is known among Tamil audience for acting in films such as "Anbe Aaruyire", "Kaalai", lost...

Comedy actor Soori who is about to make his debut as protagonist through Vetri Maaran's "Viduthalai", replied to those who got offended by his...

Not many days ago actress Jyothika criticized a hospital she went to shoot for one of her film. She asked people and authorities to...